DeCew House was the destination for Laura Secord when she set out on her celebrated trek from Queenston over the rough terrain of the Niagara Escarpment in June of 1813 to warn the British military of an impending American attack. The foundation of DeCew House has been preserved as a memorial and a park site. 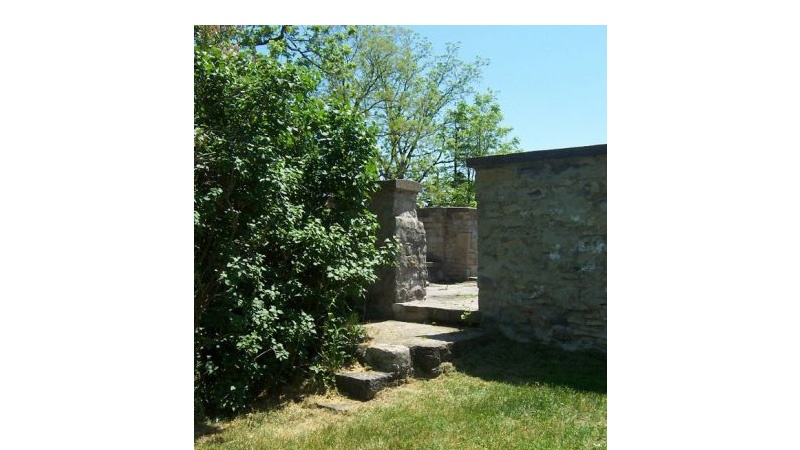 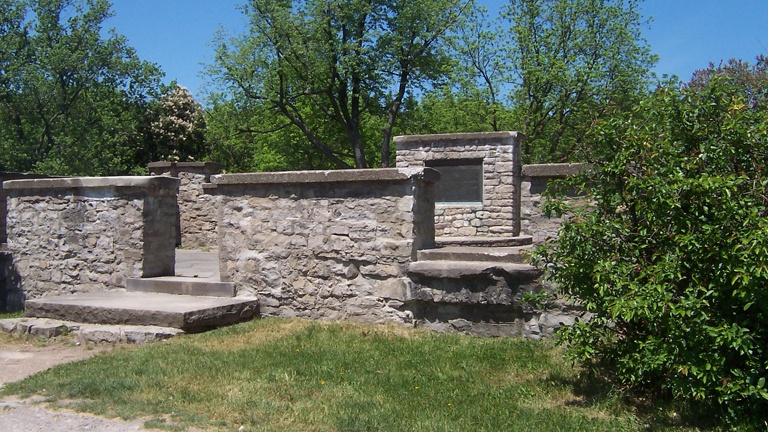 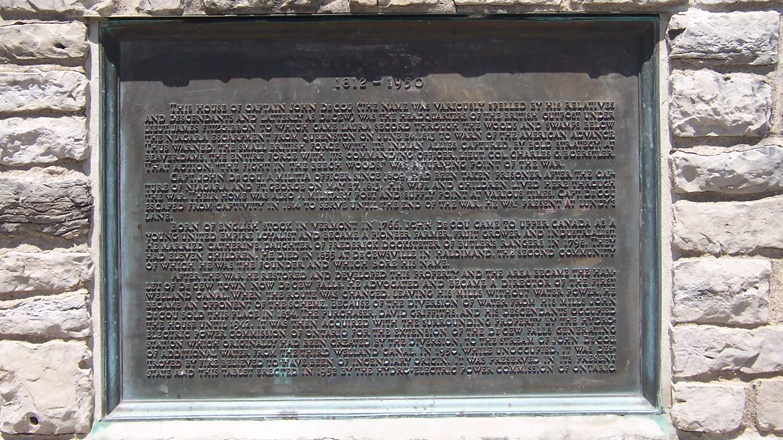 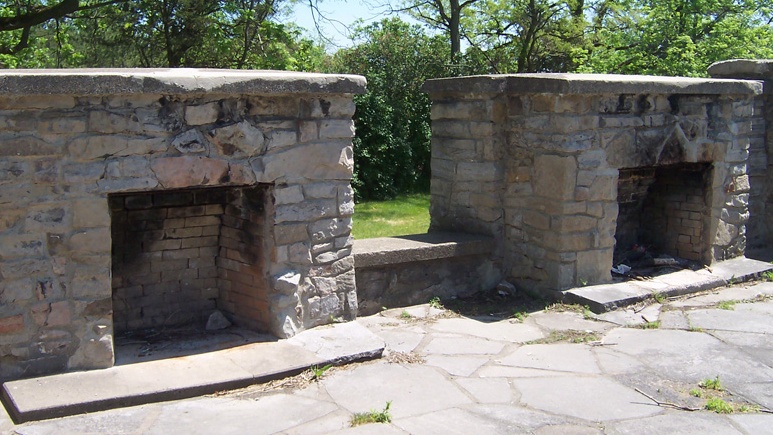 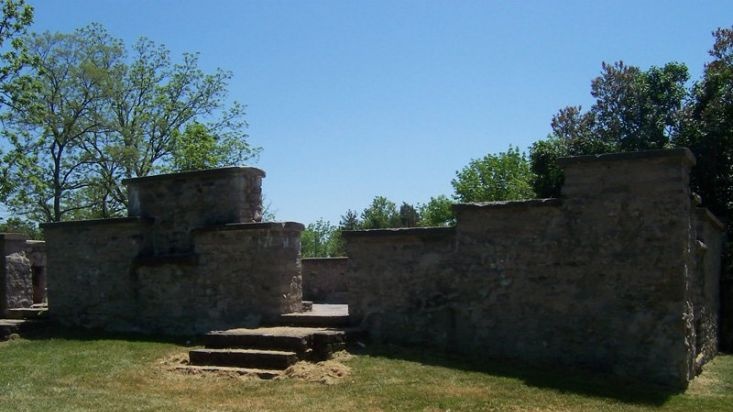 0.5 km west of the intersection of Merrittville Hwy and Decew Road, Thorold, Ontario.

DeCew House is a location of great historical significance. The house was originally built in 1808 by John DeCew, a Loyalist mill owner, merchant and entrepreneur. Arriving from New Jersey in 1787 after the Revolutionary War, DeCew initially settled with his father and most of his siblings in the Short Hills, where he worked as a surveyor.

In 1792, he bought 200 acres of land on the Niagara Escarpment above 12 Mile Creek in Thorold Township. According to his writings, he bought "a hundred acres for an axe and an Indian blanket, and another hundred acres for a gold doubloon". It was a good investment. The land was on Beaverdams Creek, a tributary of the Twelve Mile Creek, and included a waterfall where Beaverdams Creek went over the escarpment. This waterfall later became known as DeCew Falls.

John first built a sawmill and log cabin on the creek in 1792, and shortly after he established an oil mill. Business was good, and John DeCew prospered. In 1808, he erected an imposing Georgian-style stone edifice that was one of the finest and most substantial homes in the entire Niagara peninsula.

DeCew's home was also located near the edge of the Niagara Escarpment, which made it of strategic military importance four years later when war broke out in 1812. John DeCew joined the Second Lincoln Militia as a Captain in 1812, and saw active service. He was captured by rebel forces in May of 1813 after the fall of Fort George and was taken as a prisoner to Philadelphia. Meanwhile, after DeCews capture, DeCew House was occupied by British Leitenant James FitzGibbon as military headquarters for his Bloody Boys, a small contingent of 50 volunteers drawn from the British Armys 49th Regiment of Foot. Stores were collected here, DeCews mills ground grain for the army, and the house was constantly a center of military activity.

DeCew House was Laura Secord's destination when she set out from Queenston over the rough terrain of the Niagara Escarpment in June of 1813 to warn the British military of an impending American attack. It was sheer determination that enabled her to complete this difficult trek. When she arrived at DeCew House, she was able to warn FitzGibbon of the force being sent against him under the command of Col. Boerstler of the American Army. Two contingents of FitzGibbon's Iroquois allies ambushed the advancing Americans, who sustained serious casualties in the attack but who still had more men and firepower than could be mustered by the British and natives. However, FitzGibbon rode out under a white flag and convinced Boerstler that the massed British and Iroquois forces were much more substantial than the American troops, leading to an American surrender. FitzGobbons audacious bluff resulted in victory at the Battle of Beaver Dams, and enshrined him, his Iroquois allies, Laura Secord, and DeCew House in the annals of Canadian history.

DeCew sold his property and left for Haldimand Township in 1833. DeCew House went through a succession of owners and tenants. In 1833, the home, which was still referred to as 'The Barracks', was sold to David Griffiths, whose descendants lived there for over 100 years. The building was serously damaged by fire in 1938. When the property was purchased from David Griffiths by Ontario Hydro for expansion of the DeCew Falls Generating Plant in 1943, The Government of Ontario announced plans to restore the house to its original condition and make it into a museum. Nothing, however, was done, and it was boarded up and neglected.

On June 12, 1950, dilapitated and uncared for, it was virtually destroyed by fire. Ontario Hydro acted quickly to make the ruins into a historic site. The remaining walls were taken down to the level of the lower window sills, the basement was filled with the demolition rubble, and a flagstone floor was laid down. On the rear wall, opposite the main entrance, a plaque was mounted which outlines the history of the building. The unveiling of this plaque took place on October 13, 1953.
Ecological

DeCew House is located across the road from the reservoir which supplies the DeCew Water Treatment Plant, and adjacent to a wide spillway which channels water to the DeCew Power Generating Plant hydro reservoir on the edge of the escarpment. Both of these artificial water bodies contain water that has been diverted from Lake Erie via the Welland Canal, representing a very significant modification to the natural hydrology of the area.
RecreationaL USES

Picnicking, hiking. Note that access to the ajacent waterways for boating, wading or swimming is prohibited due to sudden dangerous changes in water levels and flow rates.

Heritage Thorold. Thorold: A Selection of HeritageBuildings and Sites. Booklet produced by the Thorold Local Architectural Conservation Advisory Committee (LACAC), available for sale at the City of Thorold office, Lock 7 Tourism Centre and Thorold Library. Call ahead for availability and pricing.

Hughes, Alun. 2008. Shades of Reynoldsville and DeCewTown: A History of Power Glen and Vicinity. Newsletter of the Historical Society of St. Catharines, December 2008.

0.5 km west of the intersection of Merrittville Hwy and Decew Road
Thorold, Ontario