View of base of monument.

Celebrating the life, accomplishments, and heroic death of Major-General Sir Isaac Brock, Brock's Monument stands proudly within Queenston Heights Park overlooking the Niagara Parkway. Facing the United States, Brock's Monument beckons you to climb the interior spiral staircase of 235 pie-shaped steps, soaring 50 m (190 ft.) into the air for a pararamic view of the "winding river and the shining lake beyond."Brock's monument is administered by Parks Canada and is located in Queenston Heights Park, which is maintained year-round by the Niagara Parks Commission. The site is co-managed by the Friends of Fort George.

The main entrance to the monument is flanked by two large mulberry trees believed to have been planted during the 1850s. Inside the monument's base are a number of plaques. The bodies of Brock and one of his Canadian aides-de-camp, Lieutenant-Colonel John Macdonell, lay in crypts within the limestone walls. More recent educational displays outline Brock's life, the battle, and the monument's history. A portion of Brock's limestone torso, the remnant of a lightning strike in 1929, have been added to the display. Visitors to the monument during the summer will see costumed staff at the site, and can take guided tours of the Queenston Heights battlefield or take a very interesting (and sometimes slightly gruelling) self-guided tour of the battlefield. The walking tour takes about 45 minutes according to Parks Canada, but it can be done in as little as 25 minutes depending on your pace. The path is paved and surrounded by lush vegetation, beautiful in all seasons. The monument, illuminated at night, marks the end of an interpretive historical walking trail that leads down from the monument and then back up Queenston Heights, recounting key events in the battle. 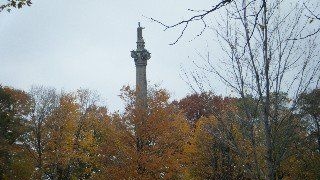 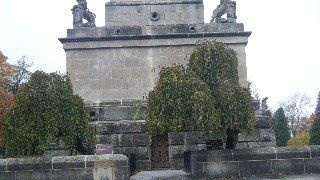 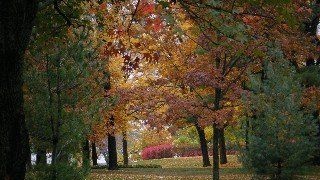 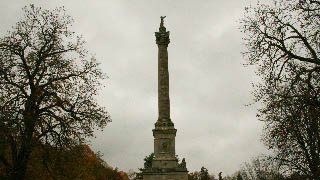 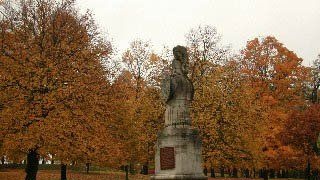 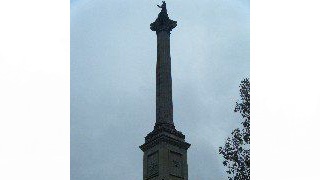 Open from 10 a.m. to 5 p.m. seven days per week from May 1st through Labour Day. Fall hours vary; closed for the winter season. For further details see website atwww.friendsoffortgeorge.ca/brocks-monument/.

The Battle of Queenston Heights saw the last charge of Major-General Sir Isaac Brock, the Commander-in-Chief of the British Forces in Upper Canada during the War of 1812. He died of a bullet wound to the chest on October 13th, 1812. Brock and one of his Canadian aides-de-camp, Lieutenant-Colonel John Macdonell, rest at the base of the monument.

Brock and his aide were initially buried in the north-east corner of Fort George in nearby Niagara-on-the-Lake, then called Newark. This corner has come to be known as Brock's Bastion and is immortalised as such by a small stone bearing that inscription.

A campaign began among prominent Upper Canadians to honour Brock, whose dramatic death provided a rallying point during and after the war, as a symbol of Canadian independence from the United States. This led to erection of the first Brock's Monument, a 135-foot (41.1m) Tuscan column with a viewing platform at the top. Construction began in 1823, and the monument was inaugurated October 13, 1824.

On April 17, 1840, an explosive charge did serious and irrevocable damage to the monument although it failed to bring it down. The attack was presumed to have been orchestrated by Benjamin Lett, an anti-British agitator and participant in the 1837 Rebellion although a subsequent Assize failed to confirm this. Brock and Macdonell's remains were removed after the monument's disassemblage and reinterred in the Queenston cemetery of the Hamilton family.

A campaign to rebuild the monument began almost immediately. In 1852, Toronto architect William Thomas had his design selected for a monument even grander than the first. The master stone carver responsible for the elaborate carving on the monument was Charles Thomas Thomas (1820-1867), a Welsh-born stone carver, associated with Worthington Brothers of Toronto, the project stone cutting contractors. Construction began in 1853 again using limestone from the nearby Queenston Quarry and was completed three years later. The remains of Brock and Macdonell were led back up Queenston Heights and interred for the fourth time. The monument was officially inaugurated on October 13, 1859.

A smaller obelisk, closer to the exact site of Brock's death within the Village of Queenston, was dedicated by Prince Edward (later King Edward VII), in 1860.

A 1929 lightning strike severely damaged Brock's statue, sending large portions crashing to the ground below. One substantial fragment of the shattered statue bearing Brock's left shoulder, epaulet, and chest medal was 'rescued' by mischevious students in the 1980s and transported to the campus of Brock University, where it languished for several years before being eventually incorporated into a Brock Memorial Garden west of H Block in Jubilee Court on the university campus.

In August 2003 the Friends of Fort George and Parks Canada held a ceremony to commemorate the 150th anniversary of the monument's groundbreaking. Engineering inspections carried out in 2003 and 2004 revealed the need for significant restorative work to the structure's interior and exterior limestone. Parks Canada closed the monument to the public in 2005 pending repairs. An extensive restoration on the monument began in 2008 and was completed in May 2009. Improvements included relining the interior walls to protect against condensation as well as the addition of battery-powered interior emergency lights.

Head north on Stanlely Ave toward McRae St
Turn right to stay on Stanley Ave
Continue onto Portage Rd
At the roundabout, take the 2nd exit onto the Niagara Parkway

Public tours are offered at Brock's Monument (including climbing the monument). Fee charged. Walking tours of the Battle of Queenston Heights are offered for school groups only. Guided school tours must be pre-booked and are offered May, June, September and October. Call 905-468-6621.