St George Anglican church - now in its second location - as viewed from church street. It has had many additions over the years, the tower was added in 1845. Photo: Marita Ragheb.

St. George's is one of the oldest parishes in Canada established in 1792, and on its current location since 1840. Purchased from the founder of the Welland Canal, W.H. Merritt. St George's has a long history as a garrison church. It serves the military stationed in Niagara, from Butler's Rangers during the War of 1812, to the Lincoln and Welland Regiment today. Inside the church there are many artifacts dedicated to its military history.

Today, St George's has a large, multi-staffed parish offering outstanding programs for both children and adults. St George's has a strong tradition of out reach ministry to the community, including a breakfast program which feeds between 75 and 125 people 365 days a year.

St George's is an Anglican church, which offers Eucharist (or 'Holy Communion') services. 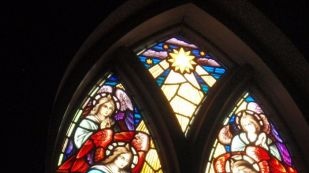 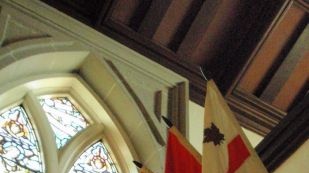 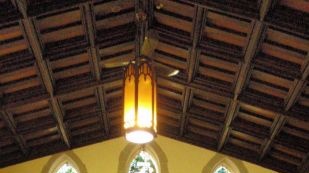 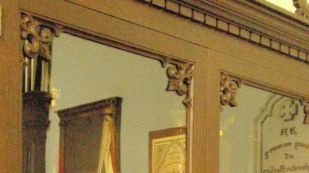 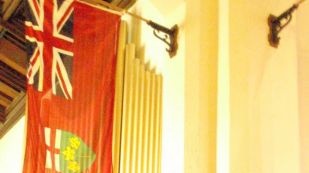 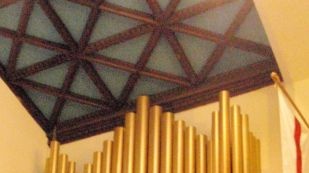 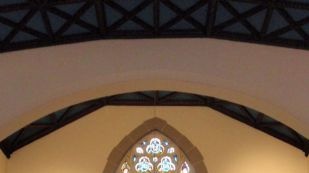 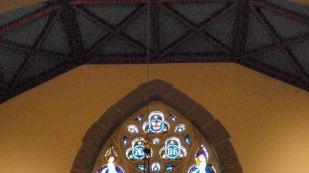 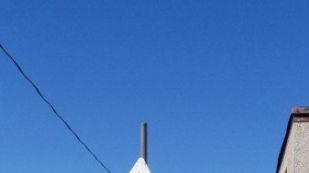 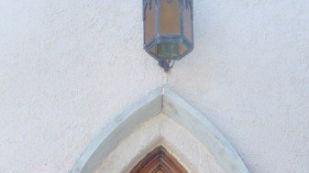 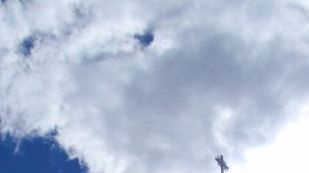 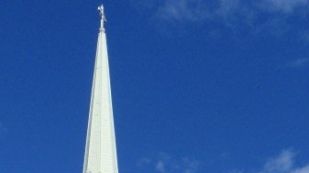 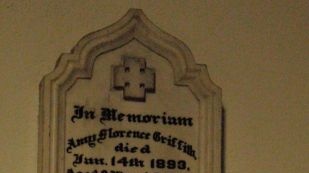 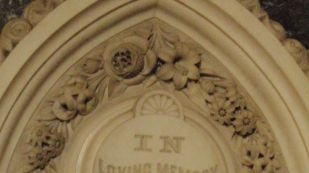 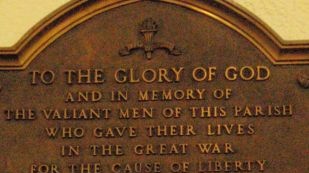 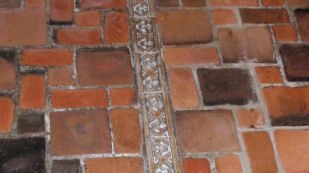 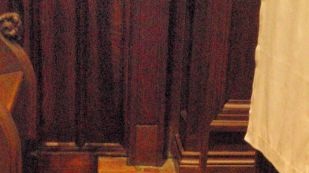 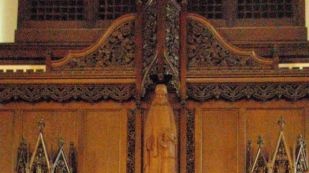 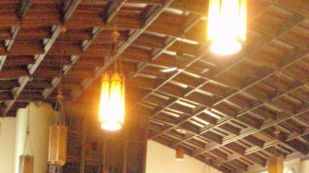 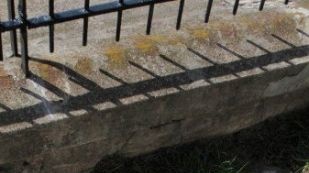 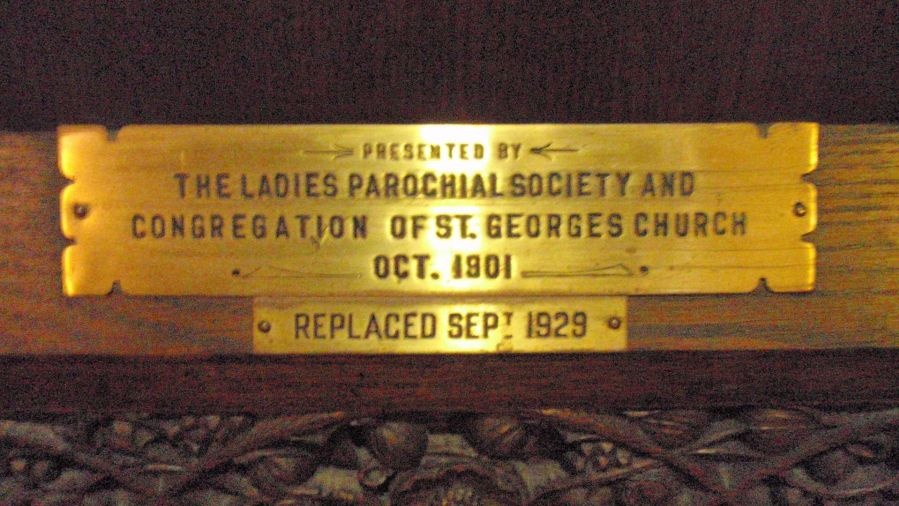 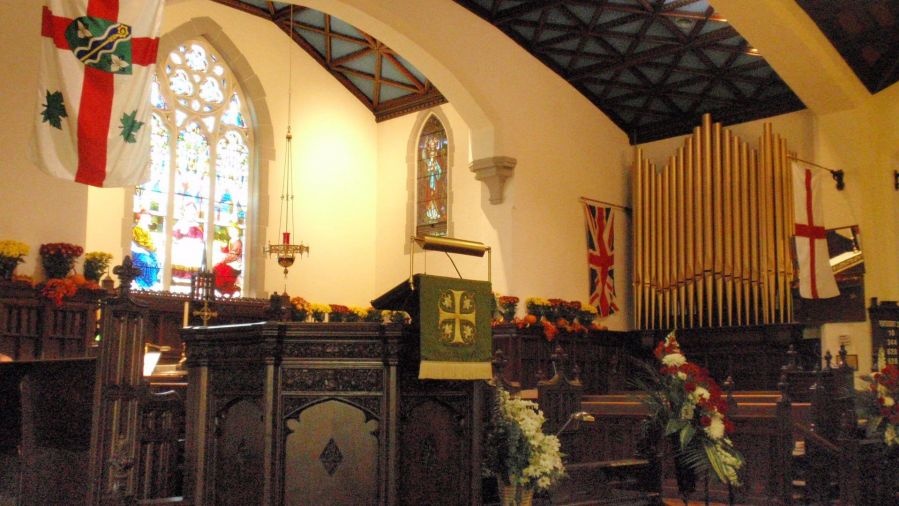 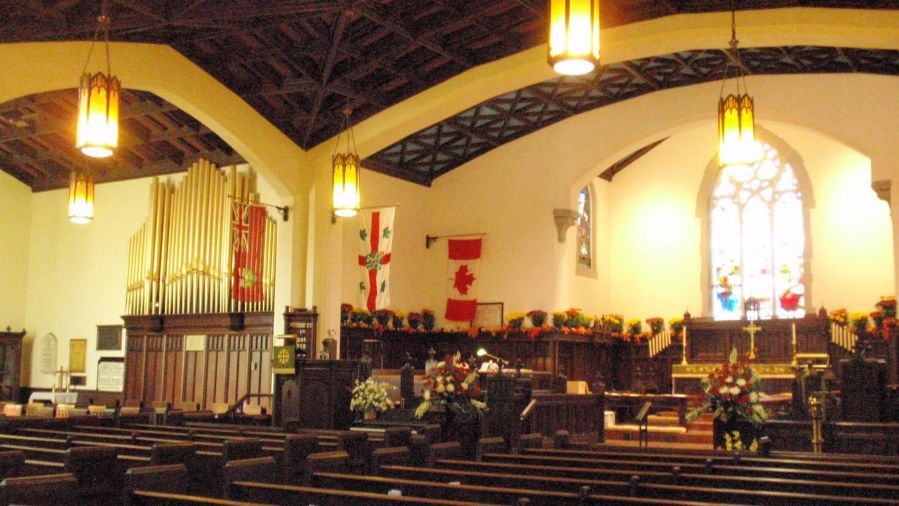 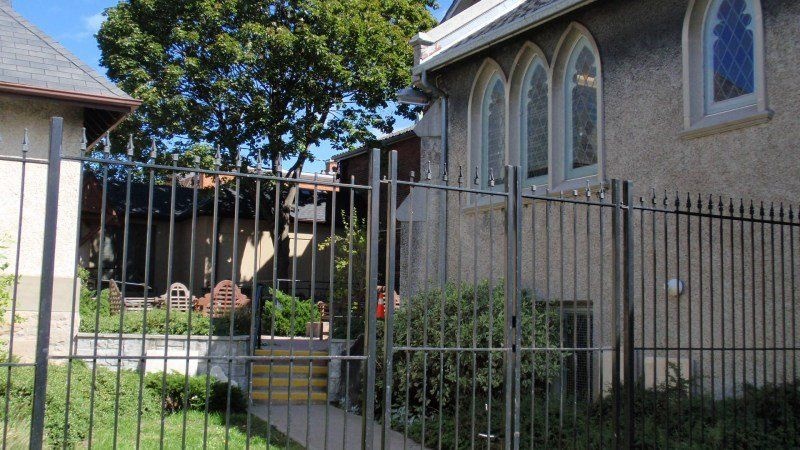 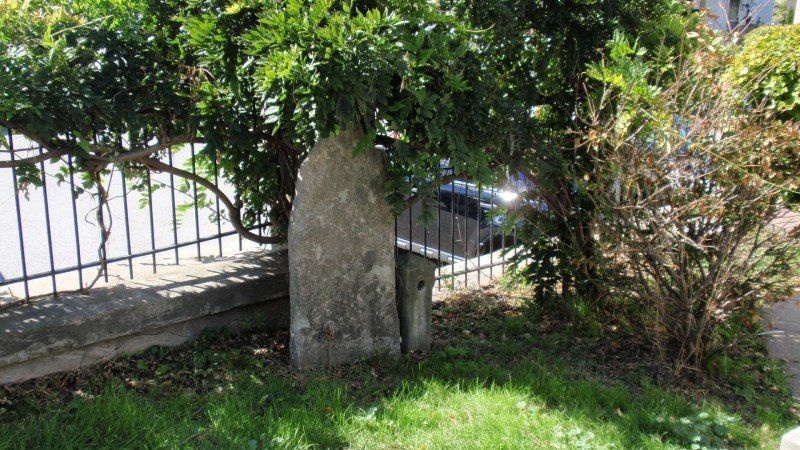 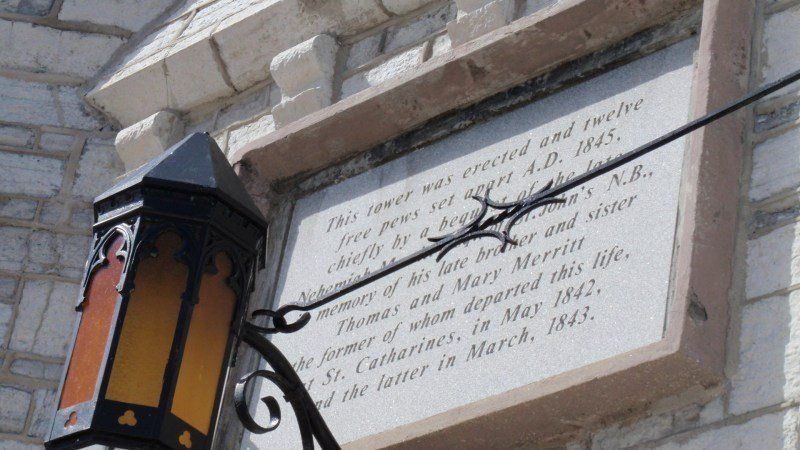 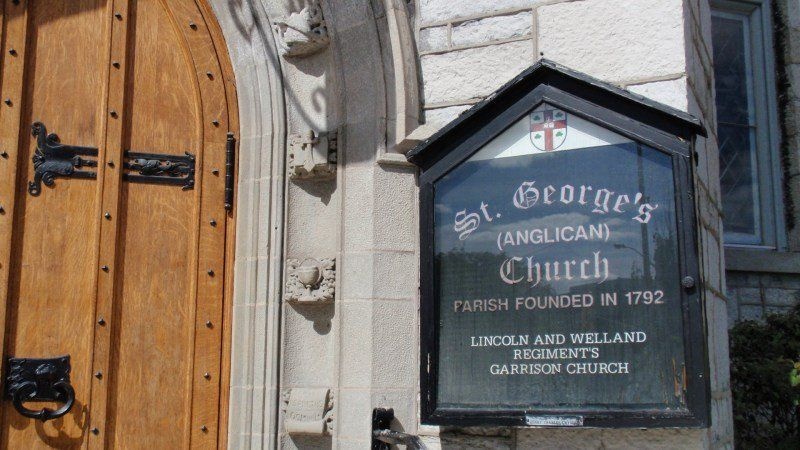 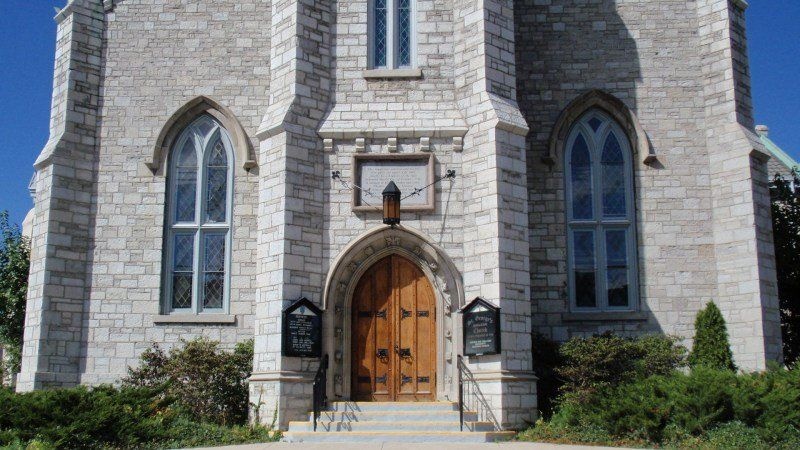 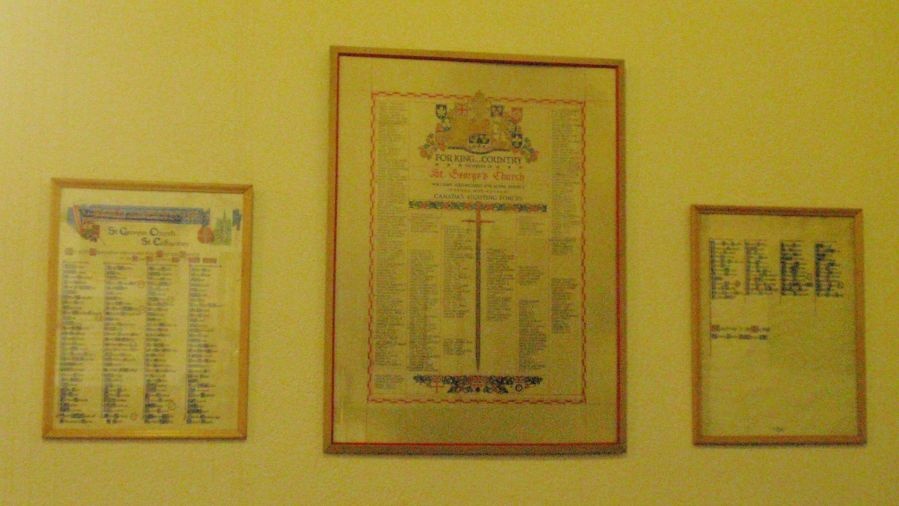 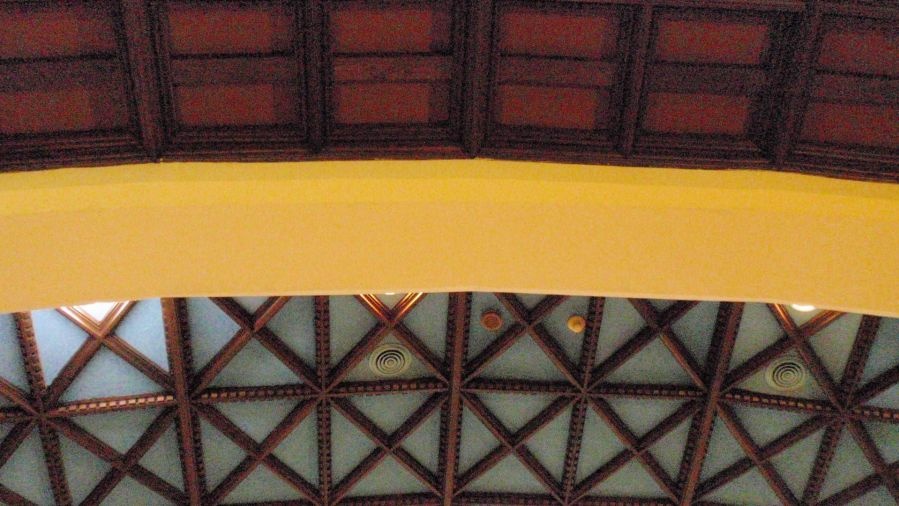 Sunday school and Nursery 10am.

From the QEW, Take the exit toward Regional Road 48/Niagara Street/Regional Road 77/Welland Avenue, Merge onto Dieppe Rd. After 450m, turn Right on to Welland Ave, and continue for 1.5km. Turn Left on to Geneva St, take your second Right on to Church St. Continue for 550m, destination will be on your Right.

Please Note: Parking in the Lower Lot (behind the church, off Raymond St) is limited to those with a parking pass, with the exception of Sunday mornings and during the two midweek services, weddings, funerals and evening meetings. All cars without an official pass will be towed. During the week please park in the upper lot only.

St George's was opened in July 1840 and has been in constant use ever since, making it one of the oldest buildings in St. Catharines. A group of Loyalist settlers erected its predecessor in 1796, the first church in the whole area, and it was used by the congregation until destroyed by fire in 1836.

The site for the new church and attached cemetery was purchased by the congregation in 1833 from William Hamilton Merritt, the founder of the Welland Canal. Construction of the core part of the building began in 1835, but was delayed because of a shortage of money and the 1837 Rebellion in what was then Upper Canada. In the intervening years since its opening in 1840, St George's building has been expanded in every direction; the tower and narthex (entrance hall in to main body of church) at the main entrance were added in 1845, the two transepts (or side wings, making the church into a cross) in 1865, the chancel (choir area) and sanctuary (sacred space surrounding alter)added in 1872-78, the organ chamber in 1912, and the parish offices in 1951. The adjoining Parish Hall was constructed in stages beginning in 1912.

St George's continues to be the home to an active congregation which traces its beginnings to 1972. They take pride in maintaining this historical edifice as a spiritual home, and welcome visitors. They encourage visitors to take the time to read the many plaques, to study the magnificent stained glass windows, and to appreciate the architecture and the wealth of memorials presented over the years.

The stone facade and tower were added to the building in 1845, a memorial to Thomas and Mary Merritt, the parents of William Hamilton Merritt. Nehemiah Merritt from New Brunswick, a brother of Thomas, gave this generous gift. It is made of Kingston limestone rather than the local Queenston variety. The architect for this part of the building was John G. Howard (of Toronto) and the cornerstone was laid in 1844 by Bishop John Strachan, the indomitable Bishop of Toronto.

Originally, only the old bell rescued from the fire in the former building was hung in the tower, but over the years a complete carillon of 23 bells has been added (See more on this below). The Celtic Cross on the top of the spire was placed there in 1967 to commemorate the 175th anniversary of the congregation. The beautiful stone archway surrounding the main entrance, as well as the oak doors, were presented in 1929 by Emily Nina Merritt, an impressive memorial to family members. The fifteen carvings represent biblical and traditional symbols of the Christian faith, such as the font, dove, mitre, censor, scroll, chalice and cross.

The Carillon: The bell from Old St George's, hung in the Merritt Tower in 1847, was installed in the church an 1887. Nine bells were installed in 1887, commemorating the Jubilee of Queen Victoria (1837-1887). The children of the parish paid for one of the bells.
Seven more bells were added in 1961 – at which time the chimes were changed from manuel striking (using a series of ropes) to electrical (using a keyboard and motors with cables attached running to the strikers on the bells). Another six bells were added in 1963, and a final bell in 2000. The facility is now classed as a carillon, one of only twelve in Canada.

Just inside the entranceway of the St George's is one of the oldest artifacts in the church, the gravestone of Paul Shipman, who died in 1825. He was an active member and leader of the congregation in its early years as well as the popular tavern owner. This community was then known as 'Shipman's Corners' and when he died the main street was re-named St Paul Street.

A plaque in the narthex commemorates Richard Mackenzie, carilloneur for 60 years. A memorial book is also displayed here in a special case recording the memorial gifts presented to St. George's over the years. It is the work of a former parish member, John G. Williams, an accomplished artist and calligrapher.

Entering the doorway from the narthex, one sees the spacious, beautiful interior of St George's Church. When the building opened in 1840 it was a simple rectangular building, but one can easily see how it has been extended in the years since.

Surrounding and above the entrance is a memorial to William DeVeaux Hilton, killed in World War II while serving with the Royal Canadian Air Force (RCAF). The carved oak figures, representing members of Canada's armed forces, are grouped around the central figure of Christ. One of the texts inscribed on the wall is from the poem, High Flight, "with silent, lifting mind I've trod the high untrespassed sanctity of space: put out my hand and touched the face of God."

Throughout the church, one's attention is caught immediately by the stained glass windows. The one in the distance above the alter is the oldest and a memorial to a former rector, the Rev. Abraham Fuller Atkinson, who held office from 1840 to 1864. Those on the side walls and in the transepts are memorials presented over the years, featuring many well-known names in the region. The three small windows in the south transept (on your right as you face the front), form the congregation's memorial to those parishioners who died during World War I. Most of the windows were made in Toronto by the McCausland Company.

Originally the church was filled with box pews, each with its own door. When the present style of pew was adopted in 1901, these doors were removed and placed along the side walls of the church, forming the wainscoting. The pews now in the church were installed in 1933 by James Hamilton Ingersoll in memory of his son, of the same name, who was killed in WWI. When Mr. Ingersoll died later that year, the transept pews were placed in the church in his memory.


The doorways in the transepts were the gift of Mr. & Mrs. Arthur Schmon, a memorial to their son Richard, an American soldier killed in WWII. You may notice the Coat of Arms of the United States on the one doorway and that of Canada on the opposite.

In 1911, Mrs Samuel DeVeaux Woodruff (Caroline) gave a generous gift to St George's enabling the congregation to restore the interior of the building, install the unique oak ceiling, construct a large organ chamber beside the south transept, and install a new pipe organ. At the same time, the Southcott family presented the new alter and the oak panelling in the chancel and sanctuary. Mr. William Rae, an architect from Toronto, designed the ceiling alter and panelling.

If you pause at the chancel steps, you will be standing where the original east end wall of the church was located. The chancel, containing the choir pews and organ console, was added in 1872-74. Four years later, the sanctuary – the area inside the alter railing – was added and completed the interior of the building.

The carved choir pews were designed in 1929 by Mr. A.E. Nicholson, a local architect. The unique tile pavement in the chancel and sanctuary was the gift of Mr. E.E. Wright, also installed in 1929, the tile coming from Italy. Also presented that year was the choir rail separating the chancel from the nave. The delicately carved alter railing, a memorial from the Park family for twin sons who had perished in a fire, is worth a closer look as it has symbols representing the suffering and crucifixion of Jesus Christ. The pulpit completed the makeover of the chancel and sanctuary.

Since its opening in 1840, St George's has been the garrison church of the local regiment. Every year, and on other special occasions, the Lincoln and Welland Regiment attends a commemorative service. The retired, regimental colours have been 'laid up' in the church for safe keeping, now carefully stored in a special cabinet in the north transept.

The pipe organ installed in 1912 was completely rebuilt by the Casavant Organ Company in 1950. It has been upgraded since, making it one of the best such instruments in the area.

In 1977, a group of 22 women in the parish completed the 81 needlepoint kneelers and cushions in the sanctuary. The symbols have been chosen from those in the windows or furnishings of the church, the community, and the diocesan Coat of Arms.

A wide variety of memorial plaques and honour rolls can be found in the two transepts. The oldest, in the south transept, is the gravestone of the young son of the first rector Clement Parkin, who died in 1828 at the age of seven. In the same transept is a memorial to four children of another rector and his wife. The baptismal font was originally near the back of the church, but was moved to its present location in 1923.

The cemetery behind St George's opened around 1834, and remained in use until Victoria Lawn Cemetery was set up by the City of St Catharines in 1856. The old gravestones record the names of many early family members in our area, but no longer mark the location of the actual graves.

The clergy and people of St George's welcome you to look about their old and beautiful spiritual home, and encourage you to come again in the future, bringing others to enjoy this unique and historical building in St Catharines.