Plaque placed in front of the chapel in 1999.

Front View of the Chapel.

The Queenston Methodist Chapel, which is now located on the same property as the Laura Secord Homestead in Queenston, was constructed in 1862 as the Wesleyan Methodist Meeting House at the corner of Queenston and Dumfries Street. It served the local Methodist congregation, a group which traced its Niagara origins back to the bible classes and meetings held in the area by Major George Neale, a devout Wesleyan Methodist and a Major in the British Army during the War of Independence in the United States.

Neal moved from the United States to Queenston in 1786 to flee political persecution, and immediately began to hold bible classes to spread the Christian Gospel. The British garrison commander at Newark feared that Neal was spreading anti- government and anti- British propaganda, and believed that only Anglican clergy educated in Britain ought to preach in the British colonies. Neal was ordered to leave the country within 30 days. However, the officer became ill and died during Major Neal's probation period, and he was permitted to stay.

Neal continued to preach zealously, and joined with Christian Warner of the nearby village of St. David's to organize bible study classes for the area. These classes evolved into regular worship sessions throughout the 19th century, and it is from this lineage that Queenston United Church traces its origins. Erected as a Wesleyan Methodist meeting house, the white clapboard building was of simple, plain design, one room in size, entirely of frame construction and featured gothic style windows. In 1925 it became part of the United Church of Canada. The church was moved to the intersection of the Niagara Parkway and Dumfries St in 1958 and an additional choir room, vestry and raised preaching platform were added. In 1997 the congregation of what was now known as Queenston United Church joined with St. David's United Church, which triggered the eventual donation of the Chapel to the Niagara Parks Commission in 1997.

The Niagara Parks Commission decided to move the church to the location of the Laura Secord Homestead in 2011. The church, now located at the rear of the Laura Secord Homestead on Queenston St near Partition Street, has been renovated inside and out to resemble its original construction in the 1860s. Moving the church from its location at the corner of Dumfries St and the Niagara Parkway in Queenston was part of a plan to improve several sites for the War of 1812 Bicentennial in 2012. The Niagara Parks Commission received $9 million to renovate the church and improve other structures also connected to the War. 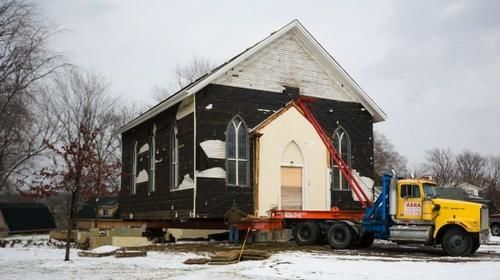 Relocation to the Laura Secord Homestead

1. Take QEW towards Niagara/East Hamilton/Fort Erie. Drive 63.4 km.
2. Keep left to continue on ON-405, follow signs for Queenston Lewiston U.S.A
3. After 5 km take the Stanley Avenue/Regional Road 102 exit toward Niagara Falls/Niagara-on-the-Lake
4. Keep left at the fork, follow signs for Niagara Pkwy/Niagara-on-the-Lake
5. Turn left onto Stanley Ave
6. Make a slight right onto Portage Rd (signs for Portage Road/Niagara Parkway/Queenston/Niagara on the Lake)
7. When you come to a roundabout, take the 2nd exit onto Niagara Pkwy
8. Drive 1 km then turn right onto Queenston St


Destination will be on the left

Destination will be on the left

A plaque placed by the Archeological and Historic Sites Board of Ontario was placed in front of the Queenston United Church now located at the Laura Secord Homestead.

of Independence, George Neal left the United States in pursuit of religious freedom

and civil security. Landing in Queenston in 1786, Major Neal determined to spread

the Christian gospel through the new land, using bible classes to reach the people.

The British Officer-in-Charge of the militia post in Queenston, believing that only

clergy of the established Church of England should preach in the colonies, and fearing

among the people, forbade him to preach and gave him thirty days to leave the

country. Unfortunately, the Officer-in-Charge himself fell ill and died during the thirty

Christian Warner of the nearby village of St. David's and organized classes for the

area. It is from these classes that Queenston United Church dates its founding.

Erected as a Wesleyan Methodist meeting house, the white clapboard building was

a simple, plain design, one room in size, entirely of frame construction and featured

officially dedicated on January 25, 1863. In 1925, the Queenston Methodist Church

became part of a Church Union movement, which led to the formation of The United

Church of Canada. Located on the northeast corner of Queen and Dumfries Street,

the church was renovated in 1939 to include a vestry, choir room and a large raised

platform. A growing congregation necessitated the church be moved to its present

site in 1958 and a basement auditorium, kitchen and extra rooms were added.

In 1997, the congregation of Queenston United Church decided to amalgamate with

St. David's United Church. The members and Trustees of the former Queenston