While not as visible from around town as some of the other churches, Queen Street Baptist's solid construction has kept it standing since 1852, even despite a fire. Photo: Marita Ragheb.

Queen Street Baptist Church is a caring, multicultural church community that has gathered together since 1833 in downtown St. Catharines. Over time, their congregation has developed and changed in many ways. For instance, their music has changed to a blend of contemporary and traditional music that encourages all types of poeple to come worsip. They also offer Spanish services.

Denomination:
The church is a member of the Canadian Baptist Federation and the Baptist Convention of Ontario and Quebec.

Two of the key practices are: believer's baptism (baptism of those who have become committed Christians) and the priesthood of all believers (meaning you don't have to be an ordained pastor to serve God in many ways within your local church). The church and denomination support mission work in many countries, as well as serving God in the local community. They welcome further contact.

Outreach and Programs:
Queen Street Baptist is the founding church for Out of the Cold, a program feeding hot meals and providing shelter, friendship and a listening ear to those from the community who need it during the cold months (November to March). Many volunteers from this and other churches work together to provide this key service.

For more information on other outreach and programs offered by the church, see their website. 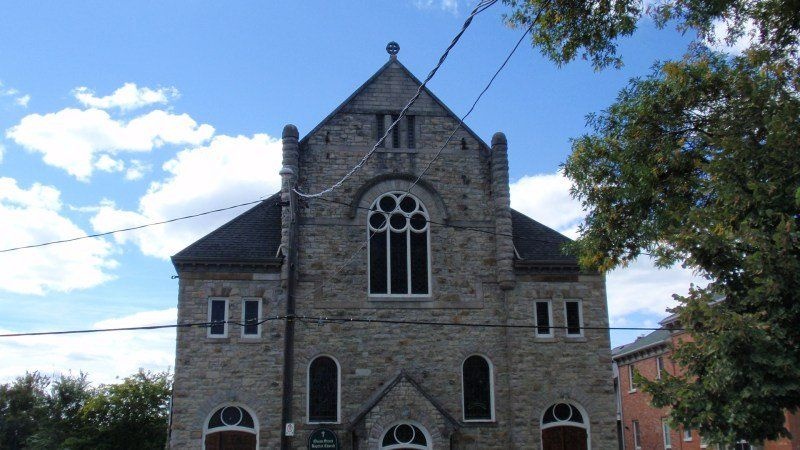 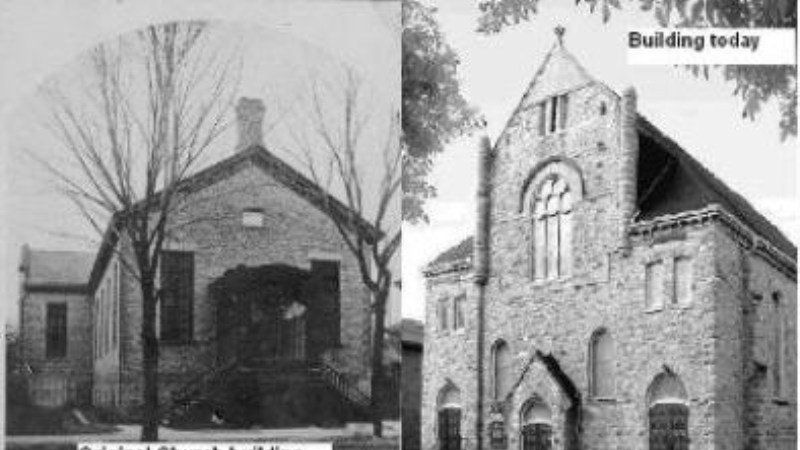 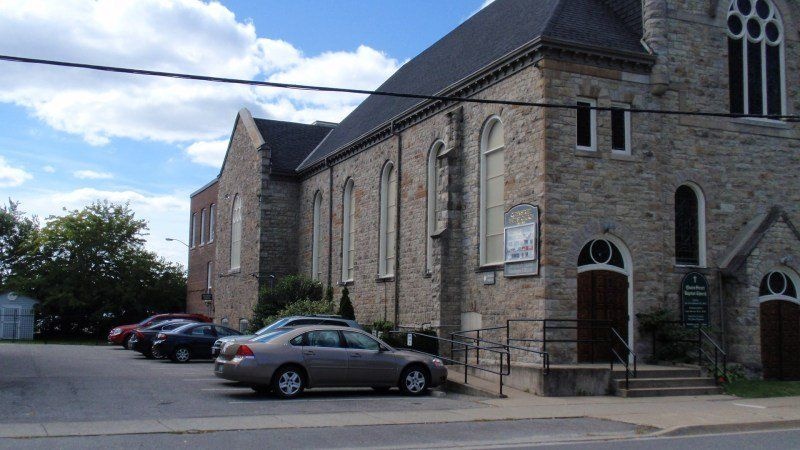 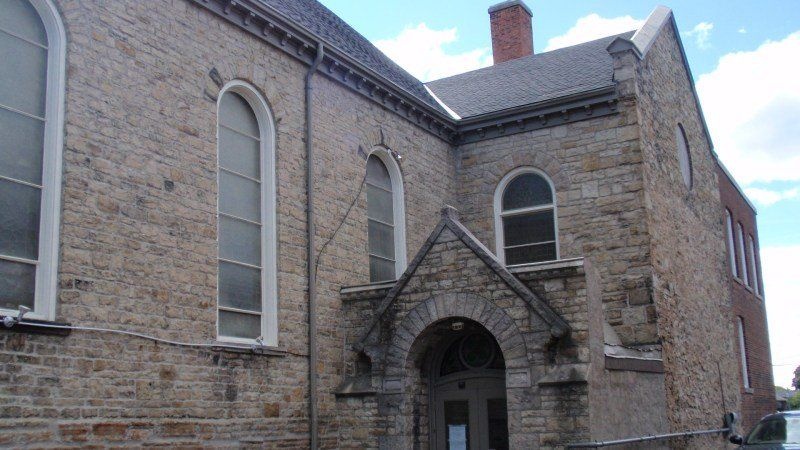 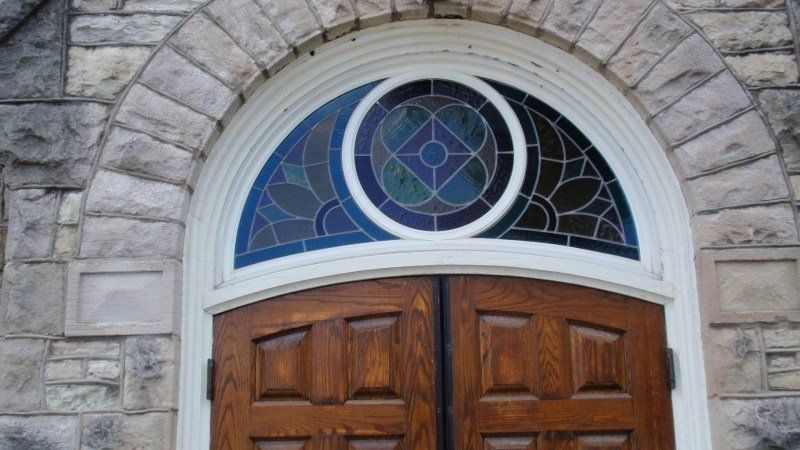 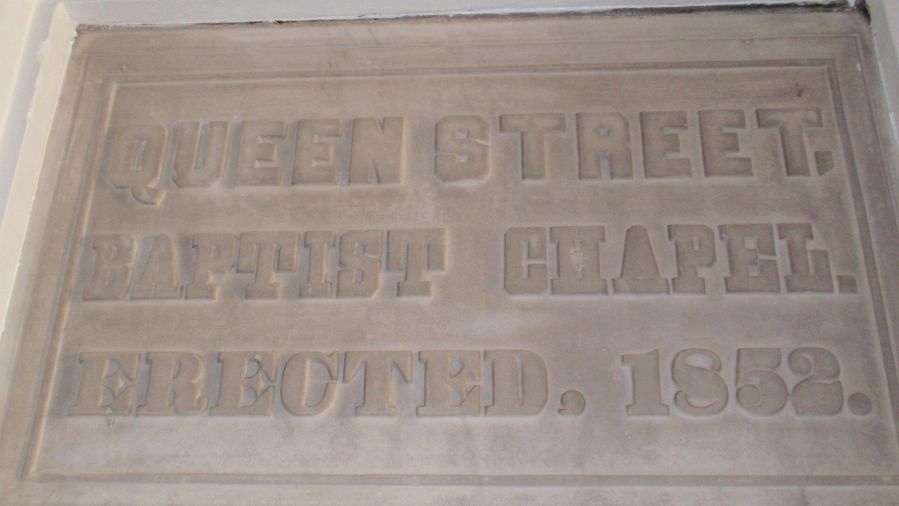 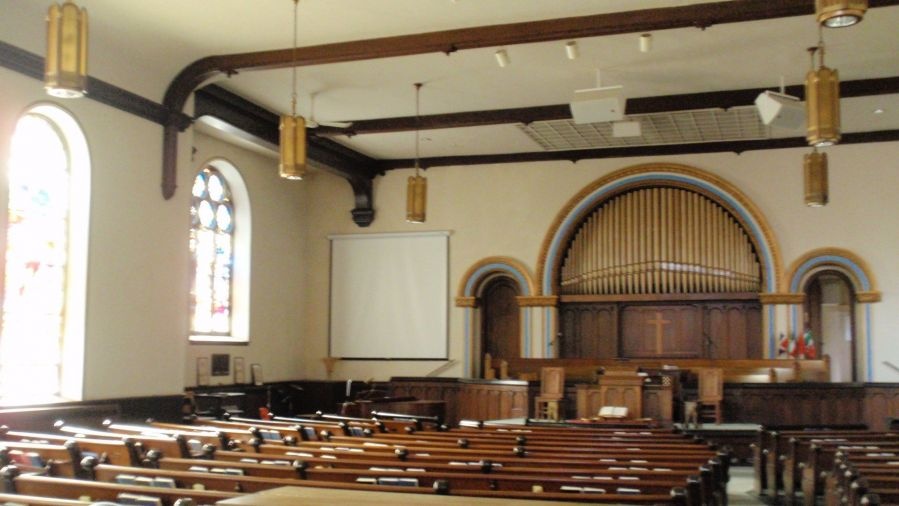 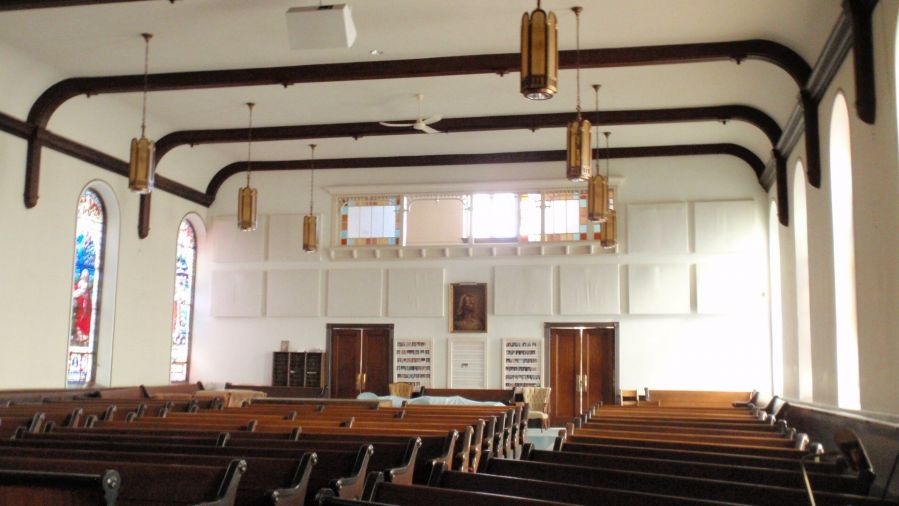 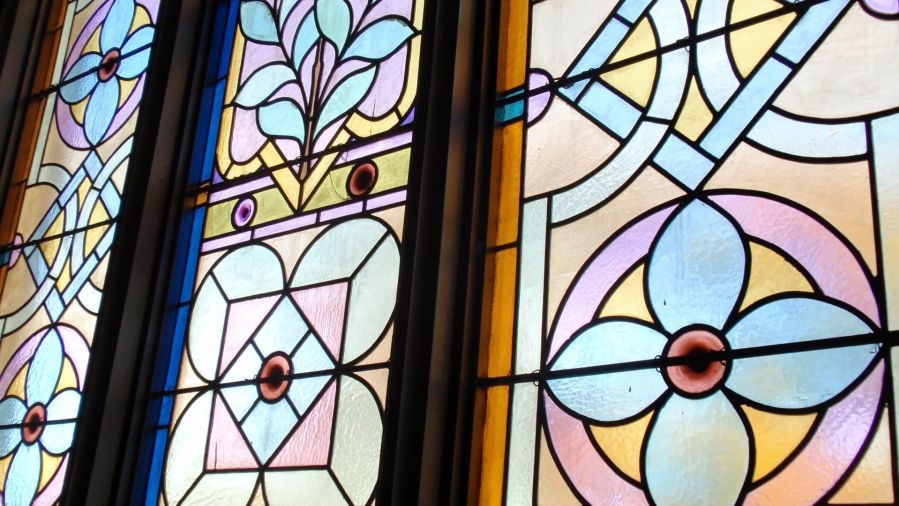 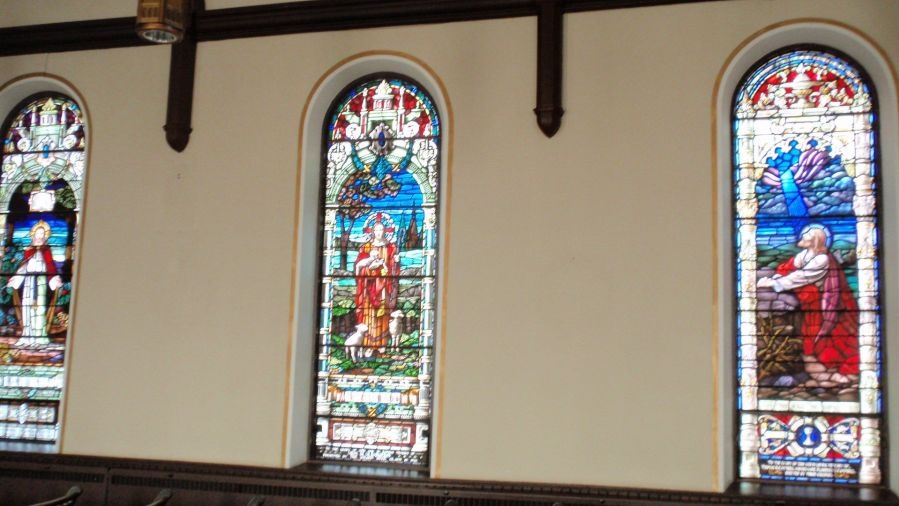 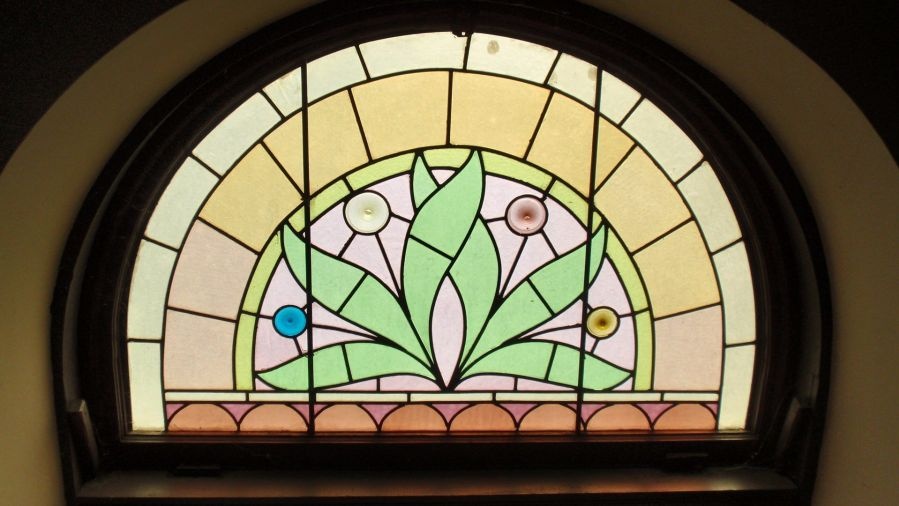 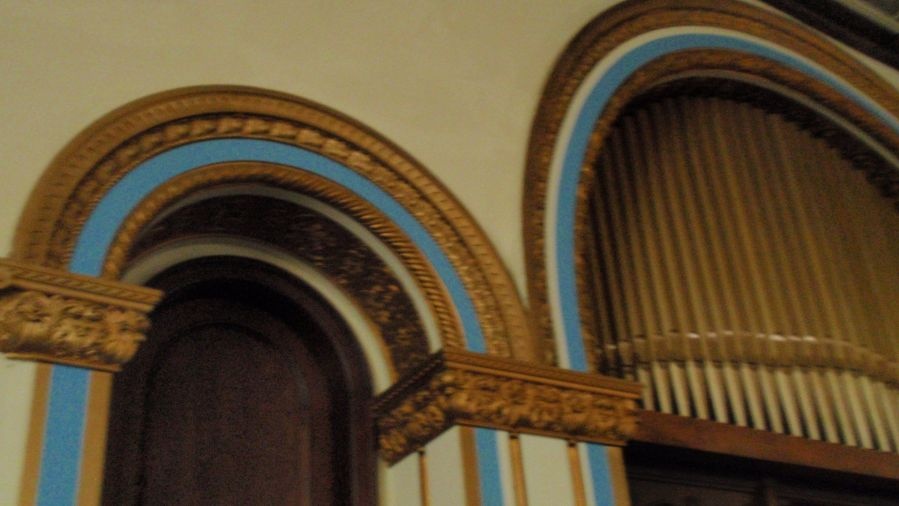 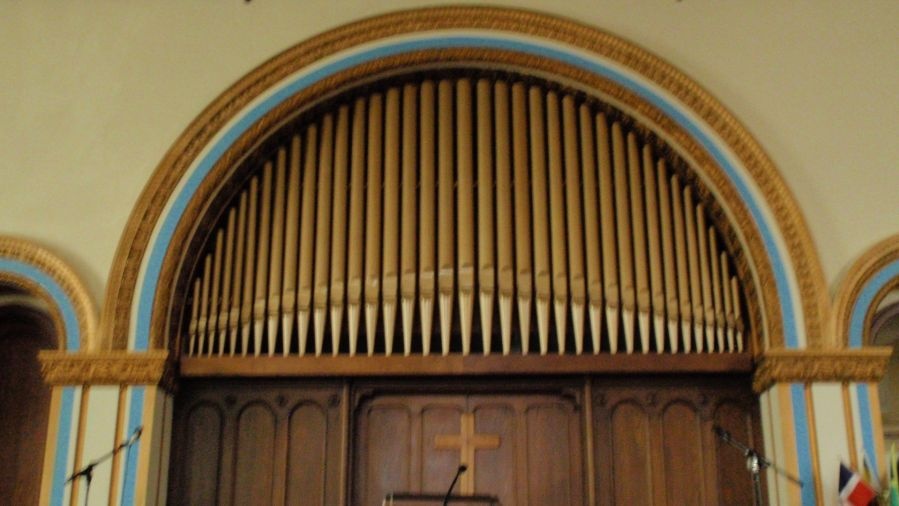 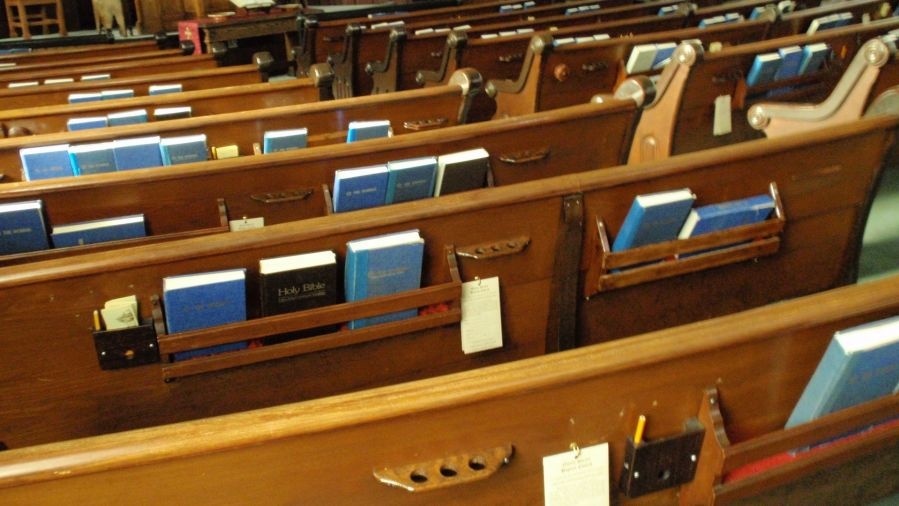 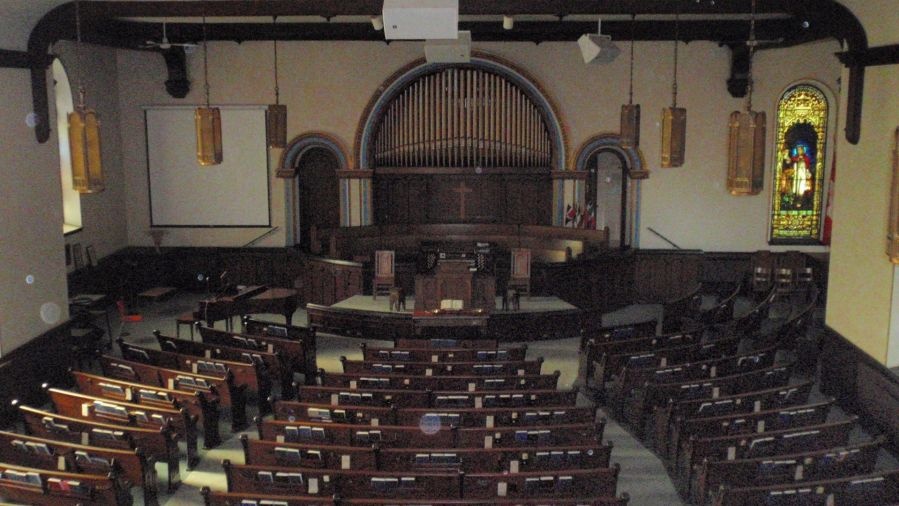 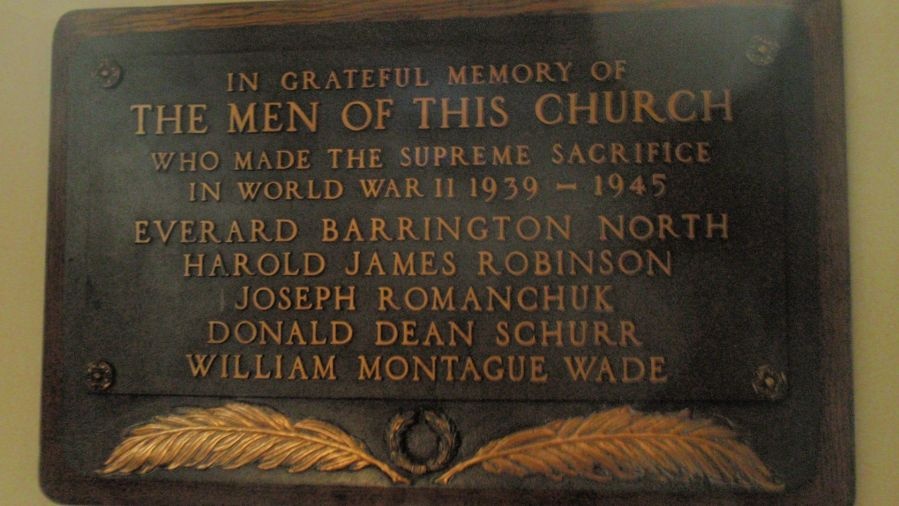 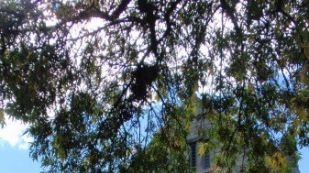 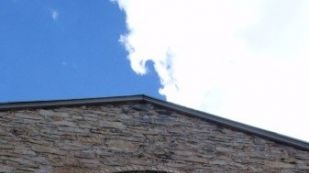 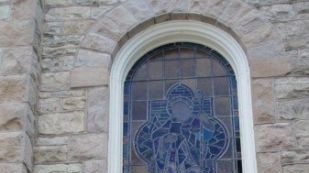 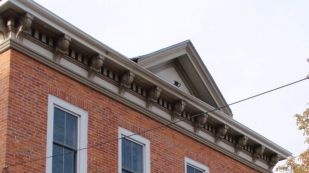 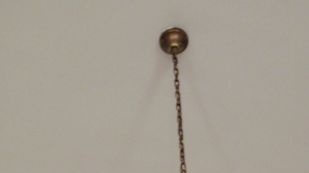 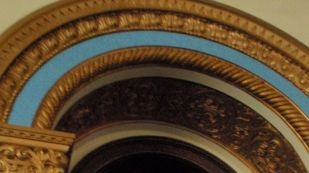 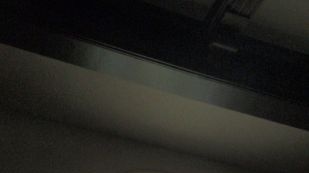 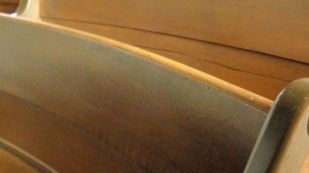 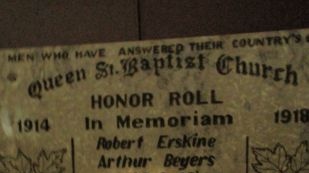 Please call ahead if you would like to see inside the church other than during services.

From the QEW, take the ON-406 S toward Thorold/Welland/Port Colborne. After 6.1 km, take the Regional Road 91 W exit toward Westchester Avenue. Merge onto Westchester Ave. After 700 m turn Right on to St. Paul Street. Take your 2nd Left on to Queen St, destination will be on your left.

From the QEW, take exit 46 toward Regional Road 44/Lake Street. Turn Right on to Lake St and continue for 2.3 km, than turn Left on to Queen St. Destination will be on your Right.

Queen Street Baptist Church's history dates back to 1833, however the original church building was built in 1852. When it burned in an accidental fire in 1891, the current building was erected; the Sunday School Hall was an addition, and opened in 1924.

Queen Street Baptist Church is considered to be quite ornately decorated on the inside compared to most Baptist churches. Some stained glass remains from the original church, however the large windows in the main body of the church are replacements from after the fire.

The following is a more detailed history and is taken from the Historical Sketch, written for the Centenary Anniversary Services - May 7, 8, 9, 10, 1933:

Before a Baptist Church was established in this area, Bro. Daniel Mesler (who for a number of years was the only known Baptist living in St Catharines) watched for people of like faith, and invited them to his home for religious services. Encouraged by Brother Daniel, the people calling themselves "Baptists" took the necessary steps to organize into and gain recognition as a church for themselves. Council meeting records were kept and a list of all church members compiles. Unfortunately, the name Daniel Mesler was not listed among those names, as he had been called away from home on important business. He did receive membership into the church a few weeks later on May 31, 1833, and continued to serve the church in various ways for more than sixty years until the end of his life.

The first pastor of the church was Elder David Currie, who was promised an annual salary of One Hundred Dollars as well as allowing him to continue to devote part of his time to farming. Records indicate that the pastorate was not harmonious, and tension which arose during this period slowed the progress of the church. A following list shows how the unhappiness within the church led to a series of pastor changes with a short period of time:
Elder David Currie 1833 – 1836
Elder J C Allison 1836 – 1838
Elder Geo. Silver 1838 (6 months only)
Elder Geo. Wilson 1838 – 1843

The pastorate of Elder Wilson is the first to show a good measure of progress. It was during this time that the church moved from Grantham to St Catharines, and with the move came a new name – First Regular Baptist Church. Services were held in Academy Hall, though talks were in place of the necessity of providing a house of worship.


Elder A. Cleghorn took over in January 1844, and in his brief year with the church made quite a lot of progress. During that year, the present site on Queen Street was purchased, and the first Baptist Church of St Catharines erected upon it. Under the date October 6, 1844, the following minute appears in the church records:

Queen St, dimensions 36' x 26'. In recording which we would not omit expression

of our sincere thanks to our Heavenly Father, that though we have not been

able to erect so splendid a house as the expectations of some anticipated, we

This was a Red Letter Day in the experience of the little church, which at that time had 41 members.

In 1852, a stone edifice (size 41' x 56') was erected, taking the place of the wooden structure built in 1844. The stone structure was built bigger to house the growing congregation, now at 112 members.

During the period of October 1873 – May 1877, Rev. C. Perrin led the congregation and inspired others with his energy and enthusiasm. Under his ministry the congregation increased, a lot was acquired and a mission building erected, and the church building enlarged. The remodelled church was dedicated January 1875.

Rev. Andrew Murdoch, P.h.D. Came to the church in 1885. He was a master scholar, with a love of nature, music, and all things beautiful. His love of music led him to help the congregation to acquire a pipe organ. "A Grand Organ Opening" was held on the evening on January 26, 1886. In 1887, the church undertook extensive repairs improving the utility and appearance of the church auditorium.

March 1, 1891 – The church was plunged into grief when a fire destroyed the church building and all its contents. Church leaders acted quickly, and church services were still held that day at a variety of places. Immediately a building committee was appointed, by March 26 plans for restoration and enlargement were accepted, and on March 31 a tender to rebuild was submitted. During construction, a new problem arose – the enlarged building encroached onto the neighbouring property to the South and the owner threatened legal action. Instead, the church bought the property and used it as a parsonage for succeeding pastors and their families.

On October 25, the church was "Reopened – Restored and Enlarged". Many references were made of the sacrifices made by the congregation so that money could be saved for the building fund. Members denied themselves holidays, new clothes, shoes, furniture, butter, tea, sugar, and many other necessities – not luxuries – so that funds could be devoted to the church.

One year after the fire, on March 1, 1892, the gift of a new pipe organ was given and installed in the church. Over the next few years, the church auditorium was enlarged to its current size and the parsonage property acquired. Again on May 30, 1923 a church committee proceeded to execute a building plan which included: a new Sunday school house, new organ, work on the auditorium, and a heating system.

The appearance of the church, as you see it today, has not changed much in almost a hundred years time.

Available at the church are copies of a Historical Sketch from 1833-1933,