A look along Neptune's Staircase, showing lock walls on the right of the photograph. (Photos: Matthew Jantz)

Inside Lock 17 of the Second Welland Canal.

Lock 21 of the Second Welland Canal.

Neptune's Staircase is one of the main historical landmarks located in Mountain Locks park. The name refers to a group of 6 locks (locks 16-21) that progress in a straight line along the south border of the park. The locks are accessible from Bradley St., and several hiking trails allow closer inspection. It is worth noting that the water in the canal is diverted underground at lock 17, making it possible to actually enter part of lock 17 and lock 16 on foot.

Locks 16-21 of the Second Welland Canal are significant for what they accomplished collectively. Lock 16 sits just north of the base of the Niagara Escarpment, which is the largest and steepest hill traversed by the Welland Canal as it climbs its way southward to Lake Erie. Because the escarpment was too steep to climb directly, the locks were oriented perpendicular to the grade in an east-west direction across the north face of the escarpment. Together the locks lifted and lowered boats over 80 feet, allowing the canal to reach the crest of the hill and continuing south near the town of Thorold.

When completed, the locks were aligned in a straight line and at regular intervals, and acted very much as a staircase for ships.

The name "Neptune's Staircase" was not original to the Welland Canal. The original Neptune's Staircase is a series of 8 staircase locks on the Caldonian Canal at Banavie, in the Scottish Highlands. The name was first used to describe locks 16 to 21 by Lord Elgin (James Bruce, 8th Earl of Elgin and Governor-General of the Province of Canada, 1847-1857) on a visit to the canal in 1850. Bruce, a Scot, likely borrowed the name from its Scottish antecedent. 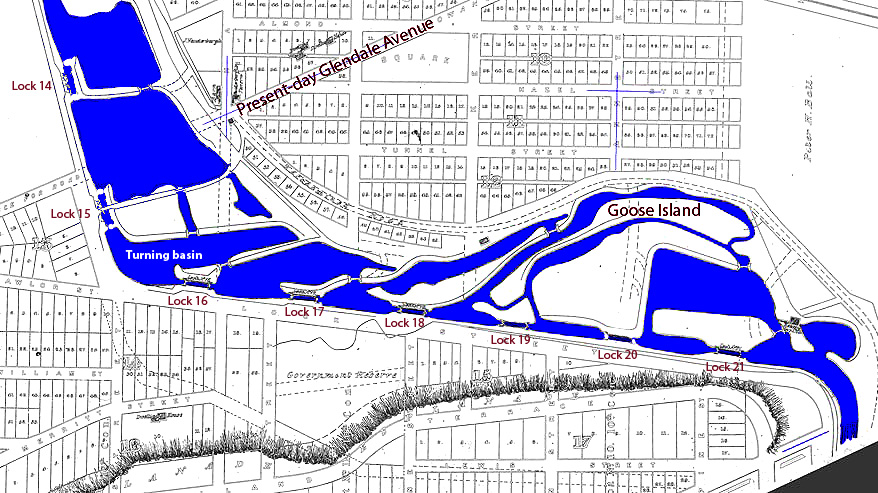 Above: 1850s map of the area that is now known as Mountain Locks Park, including Goose Island. Water-filled channels of the era are rendered in blue. The six locks of Neptune's Staircase (locks 16-21) are clearly visible in the foreground, as is the turning basin between Locks 15 and 16.

Text and photographs on this page were graciously contributed by Matthew Jantz.

(How can I become a Niagara Greenbelt website contributor?)

In the Google Maps satellite image above, you can clearly see the locks of Neptune's Staircase running from left to right across the centre of the image, immediately north of Bradley Street.