The Citizen's Committee to Save O'Reilly's Bridge is asking for your help to save this historic 107 year old single lane iron-truss bridge. It is the last Pratt and Parker style bridge of its kind in Canada according to Welland businessman John Parisee. "If south Niagara Residents care about their heritage they'd better start working to preserve it. Unless we take action, a century-old historic structure will soon be reduced to rubble." says John Parisee, who started the Citizen's Committee.

The O'Reilly Bridge was once the only river crossing for miles over the Welland River. As a response to the lack of access across this riverway, the bridge, produced in 1902 as a 'do-it-yourself structure', was assembled by a group of local residents. Located near the present Niagara Central Airport, for over one hundred years it has carried people across the river, that is, up until the end of January 2009 when the Niagara Region closed it after their study showed it was "ready to fall down."


John Parisee has gone to Regional meetings and has suggested that, "If Regional officials don't want to put it back into service, use it as a pedestrian walkway. Use it for people to fish off." His research shows that Pratt and Paker bridges "are designed to withstand anything and that they will stand up."

"It's 107 years old. It's the oldest structure on the Welland River and it's the only one of its kind in Canada," he said. "And now they want to tear it down."


"Parisee has helped organize a group of like-minded south Niagara residents called The Citizen's Committee to Save O'Reillly's Bridge. They are putting together a petition against the demolition of the bridge, and sending out letters to Fisheries and Oceans Canada and Parks and Heritage Canada among others. The group would be willing to look after the bridge as a pedestrian crossing, if the Region will agree to preserve it."


"If we tear all our heritage down, what are we leaving for future generations or anyone else to come and look at?" Parisee asked. 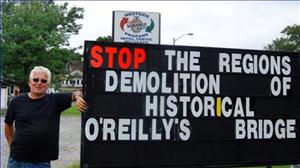 "The oldest remaining bridge on the river is O'Reilly's Bridge, built in the mid-nineteenth century and named after John O'Reilly, a Wainfleet landowner. The bridge was constructed from a 'kit' of steel bolted together by local farmers. It is unique in the area and worth a visit, especially as the Region would like to pull it down and replace it with a modern structure." Mary Lamb. Pelham Historical Society, Archivist.

Shoalts, Adam. O'Reilly's Bridge Should Stay Put. Reflections of a Naturalist. The Voice of Pelham. November 7, 2007.