The steel span of the Burgoyne Bridge seen from the Merritt Trail below (Nathan Holth - www.historicbridges.org).

W. B. Burgoyne was the editor of the St. Catharines Standard newspaper. He saw residents travelling back and forth between the downtown and the train station via the steep and treacherous hills on St. Paul Street West and he began to envision a viaduct across Twelve Mile Creek. There was public skepticisim about the construction, but the project commenced anyway.

The bridge opened December 18, 1915 and to honour the man who conceived the idea, the city named it the Burgoyne Bridge. 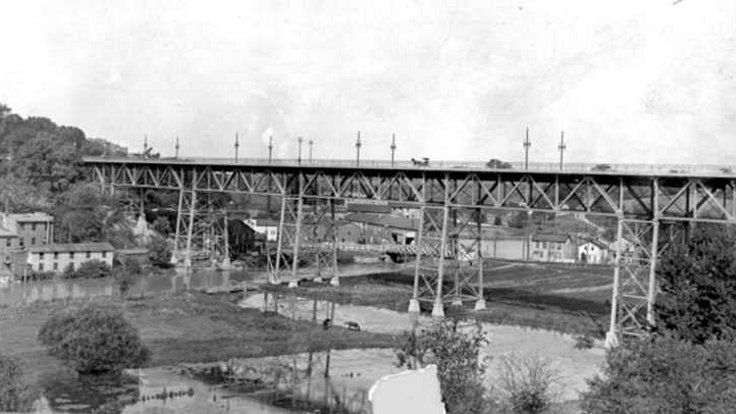 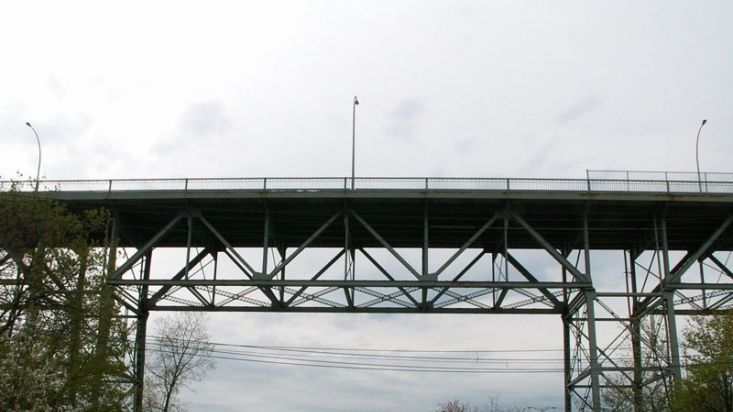 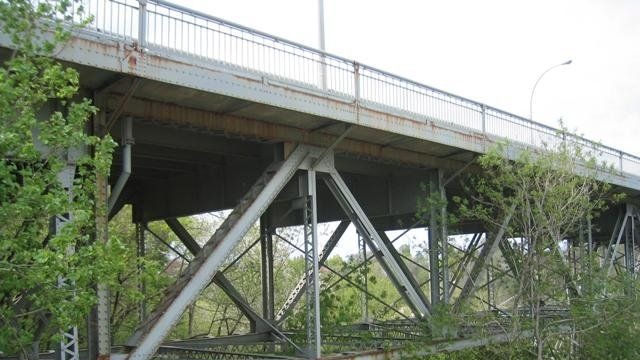 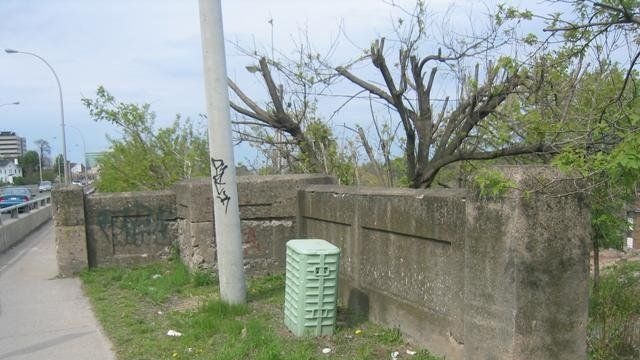 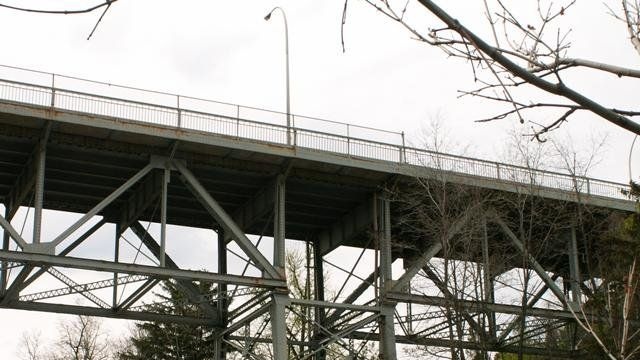 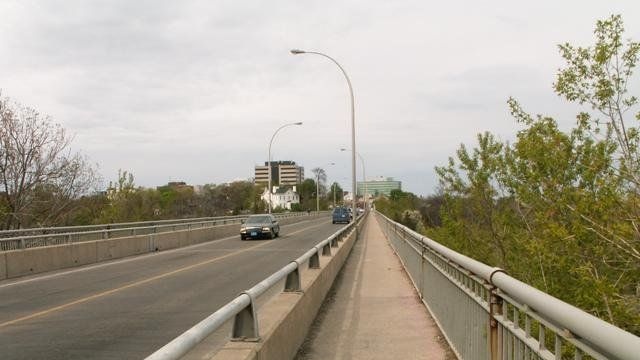 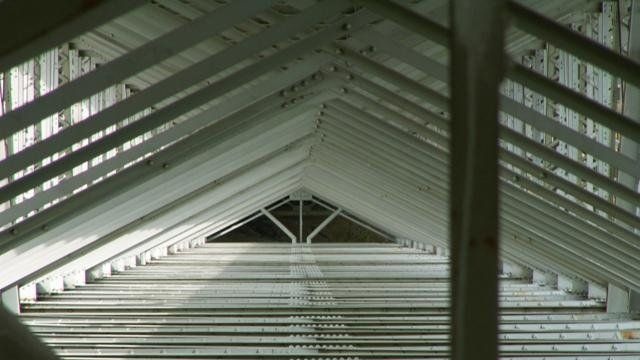 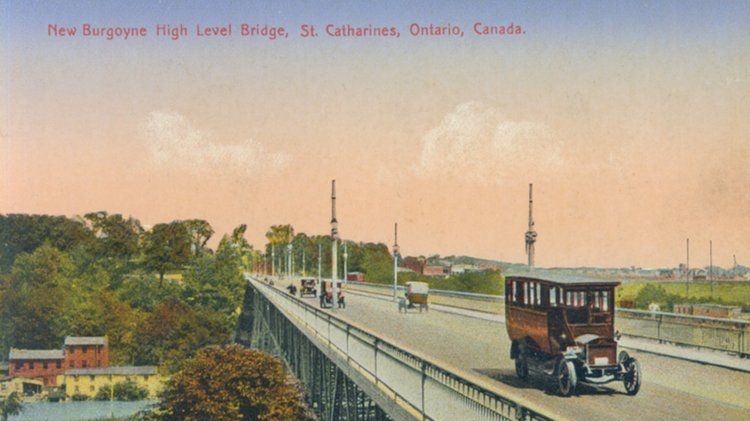 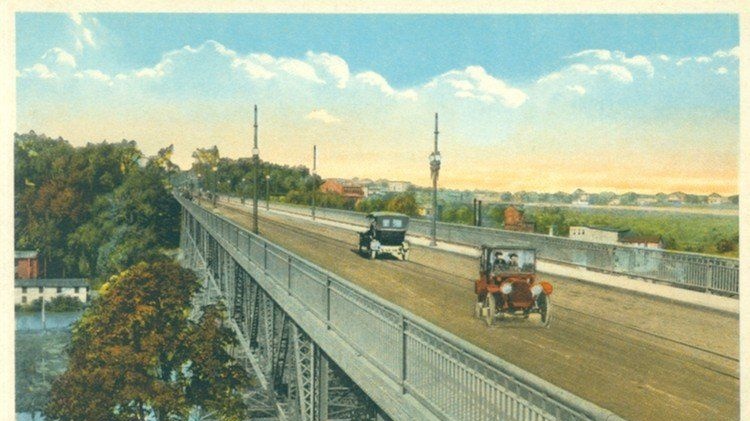 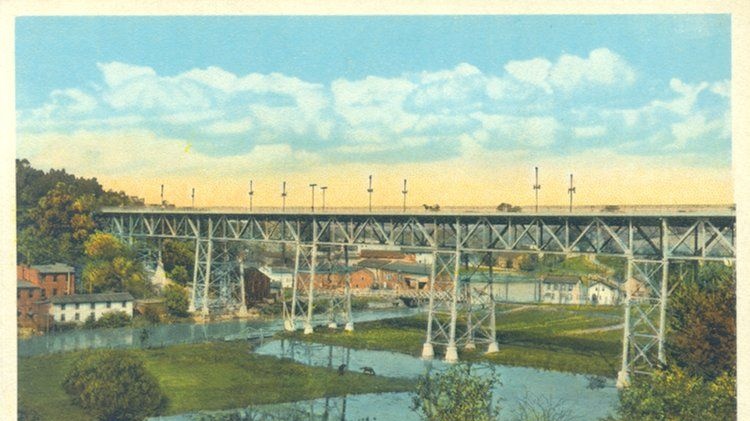 The prominent steel span of the Burgoyne Bridge has been a St. Catharines landmark since its official opening in 1915. Prior to that time, crossing the Twelve Mile Creek meant negotiating the steep slopes of the creekbed and negotiating the wooden span of the St. Paul Street Swing Bridge, also called the Low Level Bridge. This steep and ardurous route was challenging enough for pedestrians, but very difficult indeed for horse-drawn carts, especially in the winter. Improving the crossing of Twelve Mile Creek was a top municipal priority at the turn of the 20th century. Access from the downtown core to the all-important Grand Trunk Railway Station west of the city was compromised by the the steep banks on either side of the creek. These poor road transportation links also limited the city's expansion to the west.

St. Catharines businessman William Bartlett Burgoyne was the influential editor of the St. Catharines Standard newspaper, as well as a city councillor and three-times Mayor of St. Catharines. In the early years of the 20th century, he regularly saw residents struggling up and down the hills on their way to and from the Grand Trunk train station, newly rebuilt in 1898 but inconveniently located on the western edge of the city. He envisioned a viaduct across 12 Mile Creek to improve access to the station, and promoted the concept in his editorials and with city officials. There was public skepticisim about the project, but construction began in early 1914. It opened after 11 months of construction at a cost of $155,000 which was $18,000 under budget.

The new seven-span steel girder bridge, designed by Sprague and Reppert of Pittsburgh and constructed by the Canadian Bridge Company of Walkerville, was an impressive engineering achievement. The 377 metre long structure had a nine-metre wide roadbed and two sidewalks, and originally contained two sets of inlaid streetcar tracks. Its construction necessitated the straightening and realignment of the western end of St. Paul Street to accommodate the flow of traffic. Unfortunately, it also necessitated the demolition of several important buildings, including a stately private residence, the General and Marine Hospital on Cherry Street, and a training school for nurses.

From a vantage point at the centre of the Burgoyne Bridge, you can visually retrace the curving sweep of the original St. Paul Street road allowance, barely visible on the bank of the creek on the downtown side. The redundant section of St. Paul Street in the valley below was re-named St. Paul Crescent. Just upstream from the original Low Level Bridge crossing, Dick's Creek emptied into the waters of the Twelve, and formed the trajectory of the original Welland Canal until 1887. The wooden Low Level swing bridge was no longer needed, and was later replaced by the present fixed steel span, which is now for pedestrian and cyclist use only. The route that the road originally followed across Twelve Mile Creek and up the hill was bisected by road realignments and the extension of Highway 406.

The Burgoyne Bridge has survived surprisingly well over the years, despite predictions in 1975 that it would have to be completely replaced by the mid-1980s. Periodic inspections and maintenance have extended its lifespan considerably. Though costly, these repairs are much less expensive than replacing the entire structure. The bridge deck was replaced in 1962 at a cost of $110,000. Structural repairs totalling more than $300,000 were made in 1975 and 1979, and a three million dollar overhaul was undertaken in 1989, which included the installation of new shielding to protect pedestrians from being sprayed with slush and road salt from passing traffic when crossing the narrow span in winter. In 2007, further deck repairs and painting were approved by Niagara Region at an estimated cost of six million dollars, making it likely that the Burgoyne Bridge will continue to span the Twelve Mile Creek for many years to come.

This bridge and many others like it have been chronicled on the Historic Bridges website,www.historicbridges.org .