A Soldier's Wife at Fort Niagara. This engraving from the Library of Congress is purported to show Betsy Doyle assisting soldiers with the loading of cannonballs at Fort Niagara during a battle with British forces during the War of 1812. This steel engraving is byT. Walker (Source: Library of Congress cph 3a52276 //hdl.loc.gov/loc.pnp/cph.3a52276) 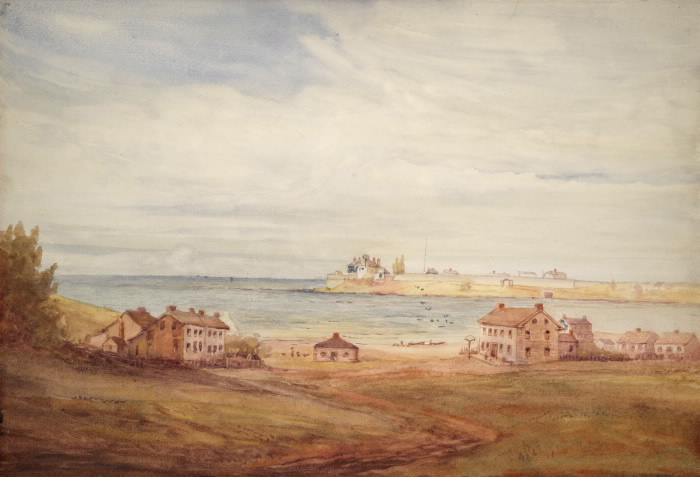 View of the Foot of King Street from the Land, Niagara-on-the-Lake, Ontario, 1854. In this mid-19th-century view of the Niagara on the Lake waterfront, you can see Fort Niagara on the American side of the Niagara river, where Betsy Doyle lived with her family and assisted the American forces. This painting, created in 1911, is attributed to Canadian artist Owen Staples (1866-1949) after a pencil drawing by F.H. Granger. (Collection: Toronto Public Library)

The Story of Besty Doyle

Betsy Doyle was an American military wife who was living with her four children at Fort Niagara. Her husband had been captured by the British at the Battle of Queenston Heights.

In November, 1812, the British began firing on Fort Niagara.

And as the soldiers around her were being killed or wounded, Betsy began loading the hotshot to the cannons. She fought alongside the soldiers of the First Regiment of the United States Artillery, carrying red-hot cannonballs from a fire to the cannons. It was dangerous, hard and lasted for more than twelve hours.

But it didn't stop there. The fort was no longer safe, and Betsy escaped with her children before the British invaded.

They walked nearly five hundred kilometres to Albany, along trails like these, to reach safety. They walked for four months.

Betsy Doyle worked as a nurse for six years, but the war had damaged her. She died in 1819.

One American General called her the Maid of Orleans.She was their own Joan of Arc.

Directions to next Point of Interest

From the Gazebo head up King Street, away from the Lake. When you reach Byron Street, you'll be turning left. If you get to the flashing red traffic light at Queen Street, you will have gone too far.