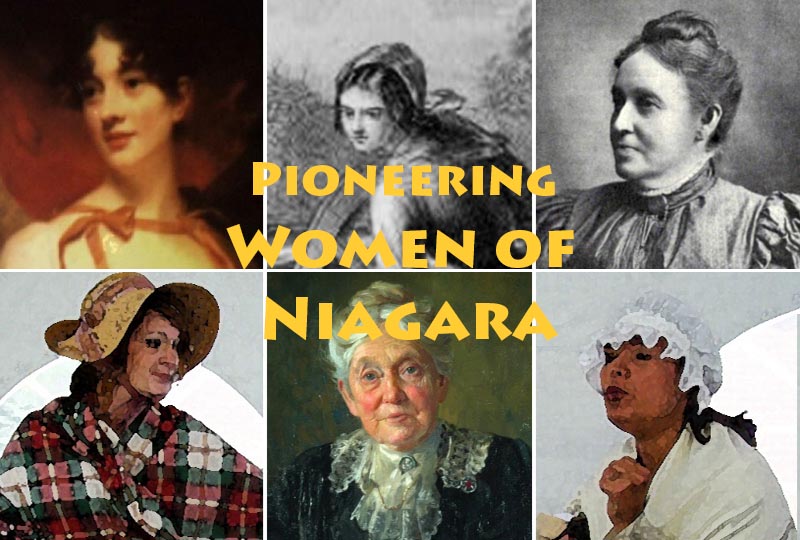 Thank you for joining us on this tour – Pioneering Women of Niagara, presented by the Friends of Laura Secord, with the support of the Ontario Trillium Foundation. On this tour I'll introduce you to the extraordinary stories of just a few of these women.

We'll start the tour here, at the Agora. This was built by Parks Canada as a meeting place, and a year round facility for public gatherings of all sorts. From here you can enjoy the view over the historic commons and Fort George.

This fortification served as the headquarters for the Centre Division of the British Army during the War of 1812.

If you were a woman in Laura Secord's time, your life revolved around your home, your family and your husband. But it was the environment that shaped your life.

In Laura's time much of the Niagara peninsula was bush and forest. For centuries the Native Nations had lived here - hunted here.They shared their knowledge with the newcomers – people like Laura and the early settlers - and everyone benefited.

The challenges facing newcomers to this land were monumental.This was a harsh new world, and people depended on their neighbours and community - particularly if you were a woman.

It was the same if you were a soldier's wife, a merchant's wife, or a farmer's wife.Back then you would have lived either on the farm, or the homestead, or in the village - or at Fort George, with your soldier husband and your children.

And if you weren't a wife yet – you were planning on becoming one - because having a husband mattered, and surviving without one was a challenge.

It was the same for a man without a woman to run his home. Every young man had a duty to find himself a wife - preferably one that was resourceful, and produce him a fine family of heirs.

In this pioneer world, men took care of the so-called manly duties that kept his family fed and sheltered: the ploughing, the planting, the harvesting, and the woodcutting.

The women looked after the home, the children, the chickens, the cattle, the fruit and the vegetable gardens.And they fed and clothed everyone.

A soldier's wife who lived at the Fort would sew, cook and do the laundry for as many men as possible - especially those without a wife.The more 'useful' she was, the more security she had - because if her dearly beloved was shot on the battlefield, and after she'd come back from mopping his brow, she'd be looking for someone to marry her right away, or she'd have no home for herself or her children.

So was a wealthy merchant's wife, and they would be expected to entertain - brilliantly. Living on the frontier had not completely erased pride of place in society.

The War of 1812 changed everything.

During the war, Niagara was the heart of the battleground. In 1813, the Americans invaded. Fort George was all but destroyed. Niagara became an occupied land. Any man who wasn't fighting, was taken prisoner. The Americans left only the very young, the elderly, and the ill.Soldiers were everywhere. Sudden raids and Indian skirmishes, made all travelling dangerous, and armed sentries constantly patrolled the trails.

The women were on their own - and when the Americans needed supplies, they came knocking (only they didn't always knock).

The occupation lasted seven months - and when the Americans left, they burned Niagara to the ground.

Yes, the War of 1812 changed everything.

Now from the Agora, turn away from Fort George and look towards the main road and see the expanse of the Commons – the open grassy field on the other side.