The atmosphere is buzzing, people push and shove past you, manoeuvering through the narrow soi's en route to find their next great bargain in the jumble of items piled up in one of about 8000 sellers' shops. This is the Chatuchak Weekend Market, also known as the Jatujak Market, located on 35 acres northeast of Bangkok, attracting 200 000 visitors every weekend to tackle the maze of stalls.

Dizzying displays of intricately painted pots, jars, decorated with bright colours and embellished with hints of gold, all organized in rows upon rows on mirrored shelves. Stacks of beautiful plates and bowls are found below the shelves, while smaller items are arranged more haphazardly in large plastic bins for customers to sort through and pick out their favourites. Thais and tourists alike frequent this area of the market in search of traditional Thai-style peices to add to their homes. From cups to candleholders and teapots to sink basins, the Chatuchak Market has a huge variety of ceramic ware for visitors to carefully maneuver through while searching for the perfect piece. 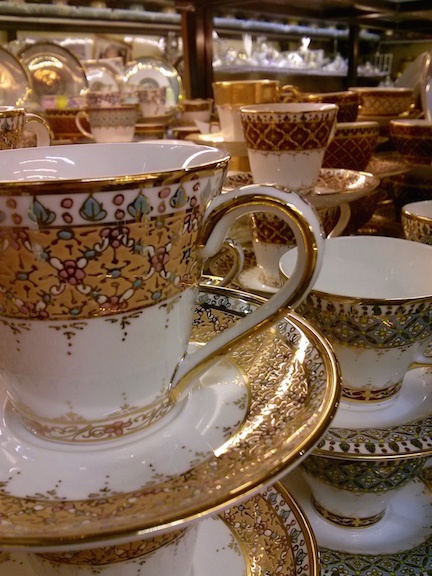 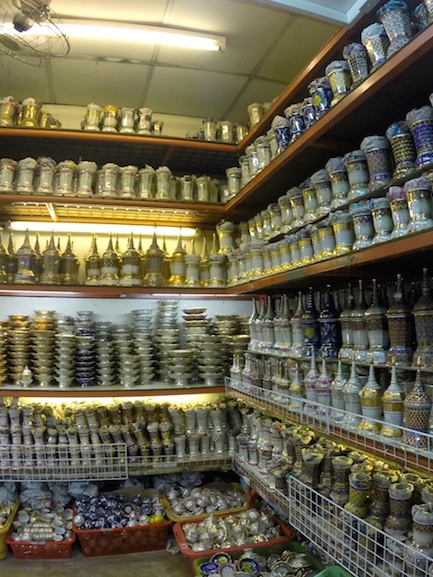 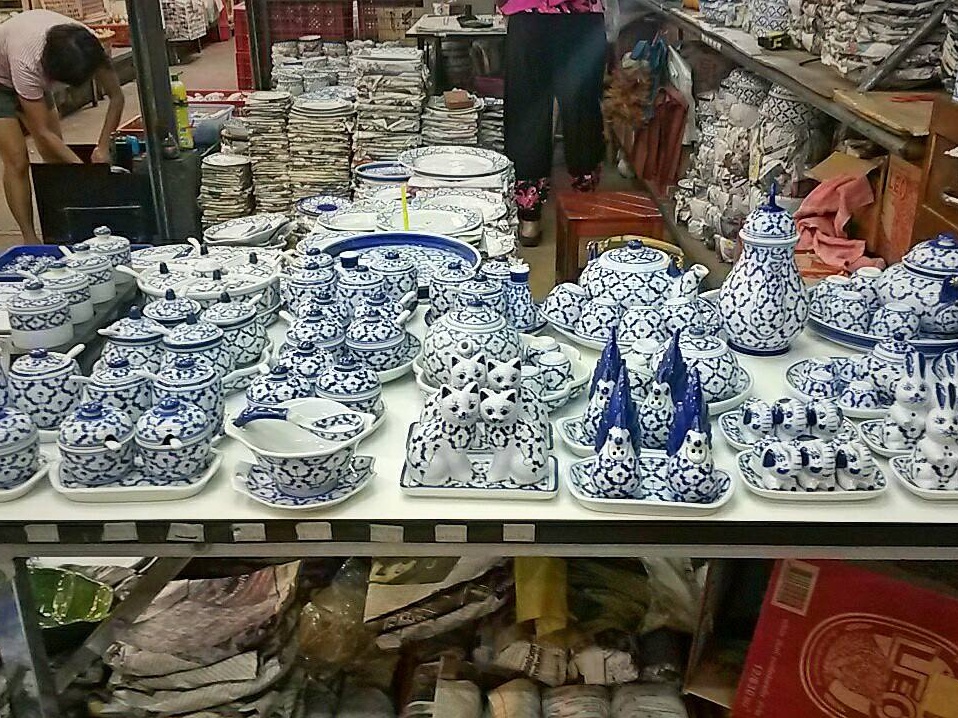 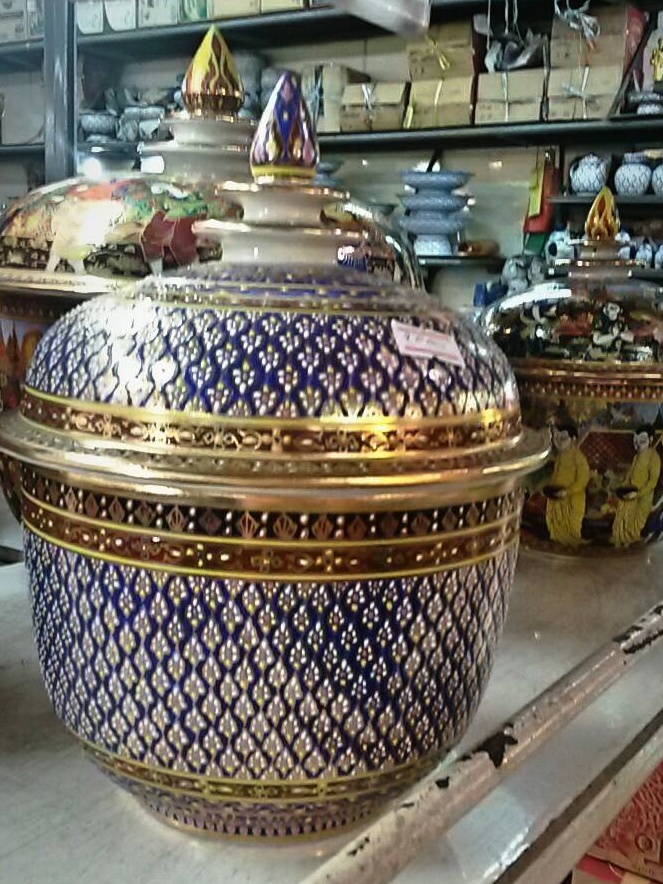 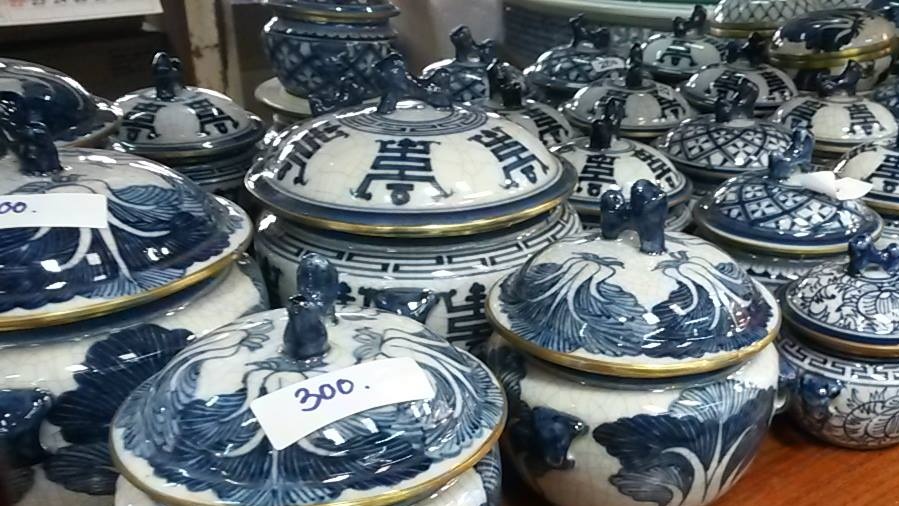 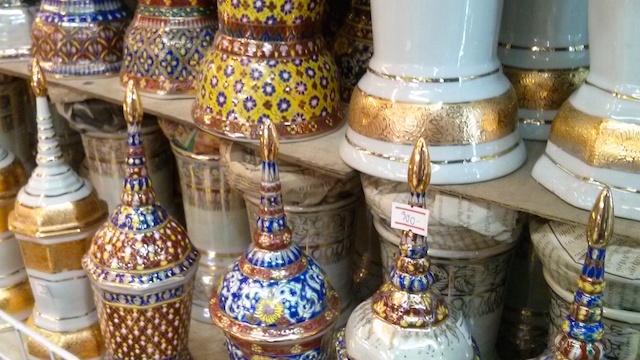 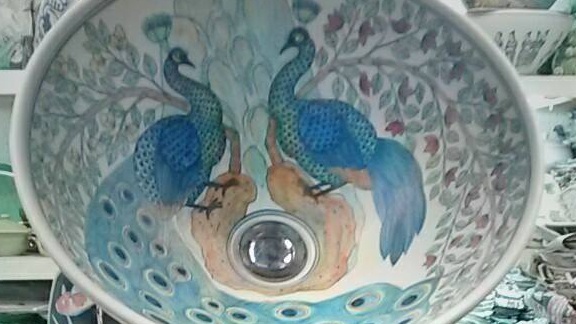 Thai ceramics have a long history and importance within the culture as they are decorated with different styles of art that are representative of different time periods in the history of Thailand. Traditionally, all ceramics were handpainted and the designs reflected the current events at the time and the different preferences of the rulers of the country. The intricate designs of the ceramics require a great amount of skill from the craftspeople to be able to execute with such perfection. In the present day, the ceramics are factory produced and then handpainted, so although production methods are not completely traditional, it is still beneficial in preserving traditional Thai art styles and craftsmanship.

Consumers should be aware that the Chatuchak Market is also home to other types of ceramicware that is completely factory produced and is not representative of Thai history and culture, and to keep on the lookout for styles shown in the attached photographs.

Ceramics have been an important part of Thai culture throughout its existence, and have gone through many different changes and styles, some of the more popular historical styles can still be found in the stalls of the Chatuchak Market. Original Thai ceramics were fairly simple in design and decoration, as they were used for more utilitarian purposes. Many of these early ceramics were roughly made and glazed with more neutral earth tones of red, grey, black, white, yellow and brown. Later examples found in Ban Chiang, which is present day Udon Thani Province, showed more decorative patterns and engraving for decoration of the ceramics.

During the Ayutthaya Period through the 19th century, the prominent style of ceramics was called Bencharong, which means 'five colours' and reflects the ancient work of Sino Thai art. The original colours used to decorate the ceramics were red, yellow, black, blue and green, and the colours that were introduced later were pink, purple, blue and reddish yellow. After the Ayutthaya period, ceramic styles remained mostly unchanged except for the addition of gold, as either background colour or for decorative outlining of designs, called Lai Nam Thong.

Specific designs of pieces have changed throughout history and many traditional designs can be found on ceramic pieces today. Some common designs to look for at the market are birds, plants and flowers, as well as a trellis and rice ball design, and pieces showing the Norasingha, which is a Buddhist deity, and garuda, which is a mythical royal bird

Easily accessed by MRT Subway and the BTS Skytrain

MRT Subway: Get off at Kamphaeng Phet, and you will pop up inside the market

Click here for more information about the MRT Subway

BTS Skytrain: Get off at Mo Chit Station, follow the crowds down onto Phahonythin Rd., follow it southwest about 1 Kilometre and turn right onto Kamphaeng Phet 3 Rd. until you reach one of the entrances on the left hand side of the street

Click here for more information about the BTS Skytrain

The Administration of Chatuchak Market

Maps are available at each entrance

Click here for an online map of Chatuchak Market

Toilets are located throughout the market

The main streets inside the market are wheelchair and stroller accessible

The pin on the map above is centrally located in the area where you will find the greatest concentration of ceramics vendors in Chatuchak Market.