Bang Saen and Beyond - Tuk Tuk

Passengers exit a tuk tuk at a bus terminal.

Many tuk tuk's are decorated to appeal to tourists. License plates in particular will reflect this.

A common site in Bangkok is brightly coloured tuk tuk's lining the streets.

A unique and authentic way to travel around Thailand is to hop in a tuk tuk!

Tuk Tuks are recognized as three wheeled motorized cabins with a driver situated at the front and normally 1-2 benches behind. Tuk tuks are brightly coloured, and some are equipped with radios and neon lights to amp up the tuk tuk experience. Tuk tuks in Thailand have become more of a tourist novelty in Bangkok and in other tourist areas, as they can be quite pricey in places where they are more about the experience rather than getting from point A to B. Smaller municipalities like Ayutthaya and Sriracha still use them widely for intramunicipal transportation. Fees are negotiated in advance with the driver based on distance, time of day, competition, and weather conditions (more costly when raining!) 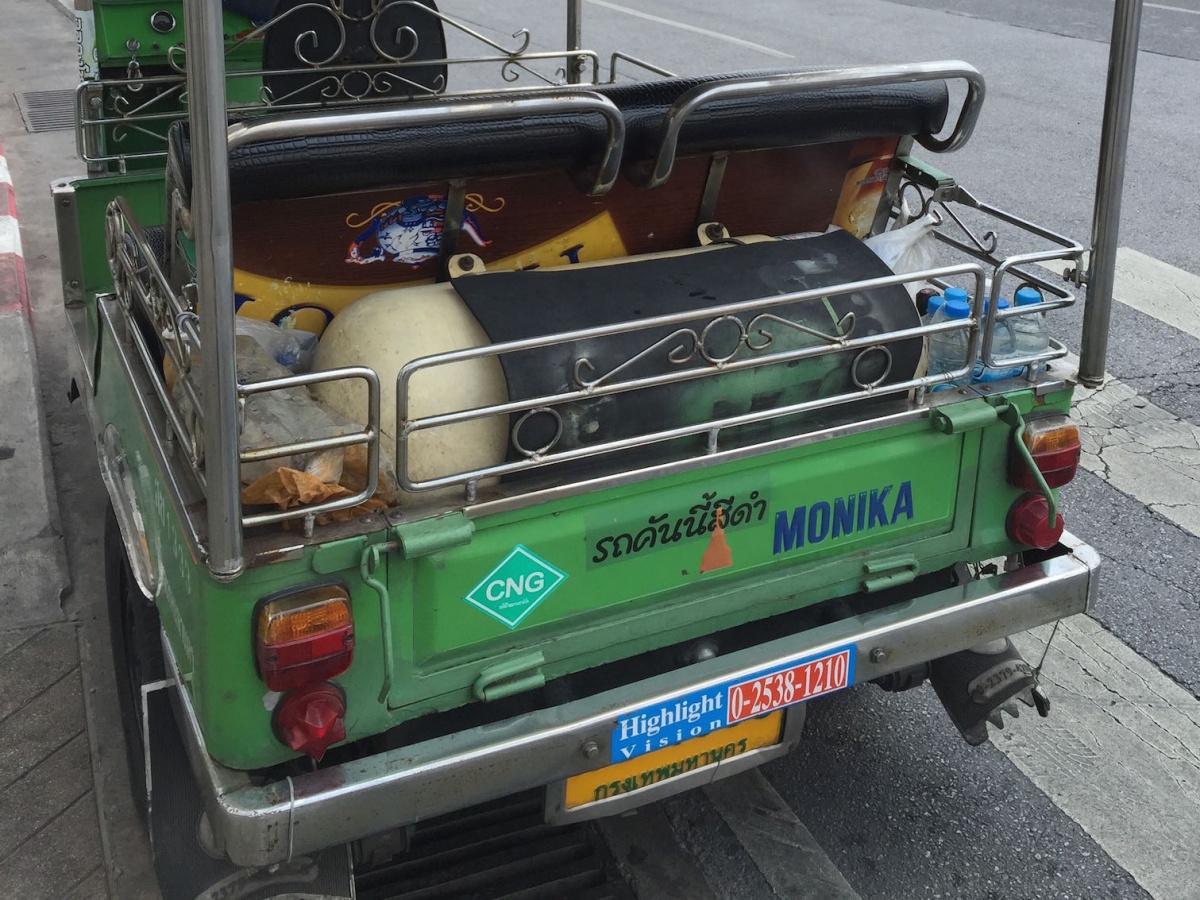 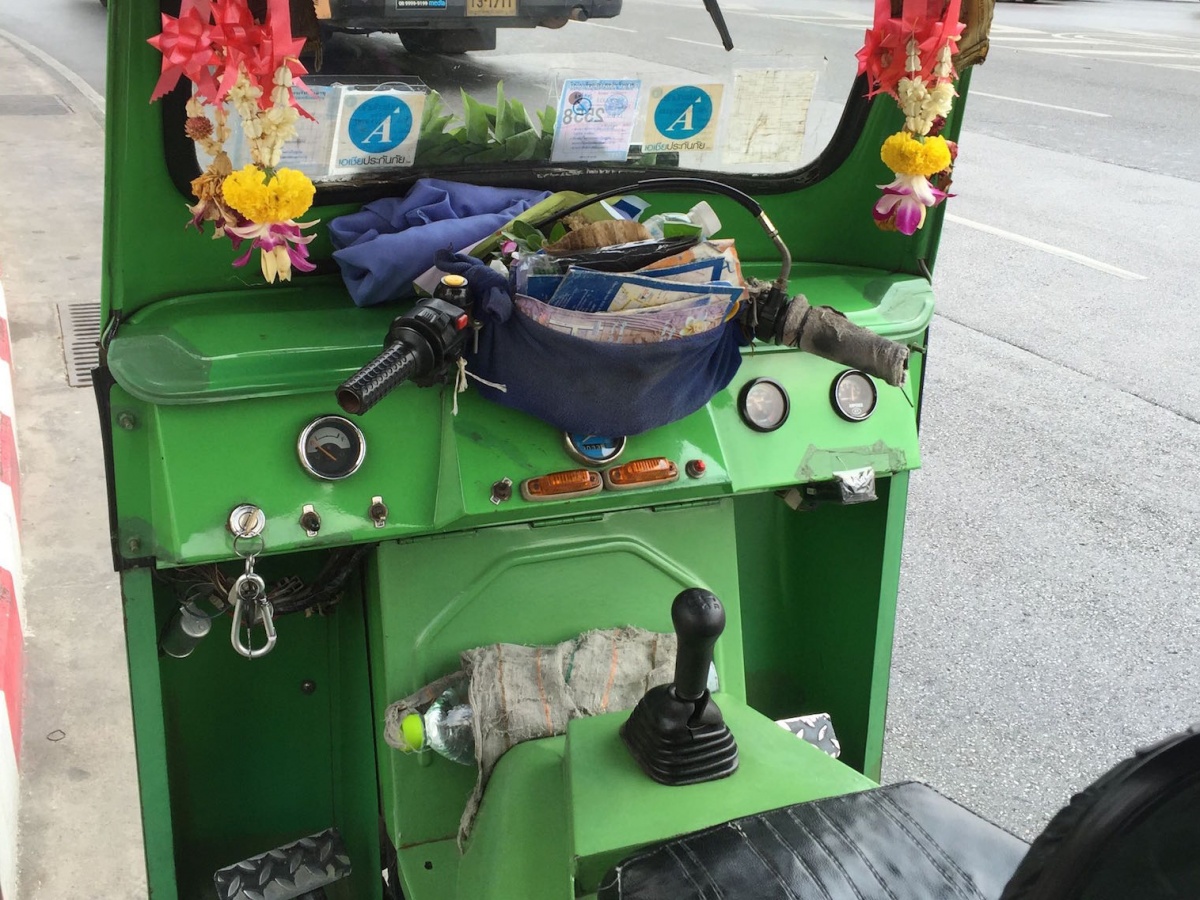 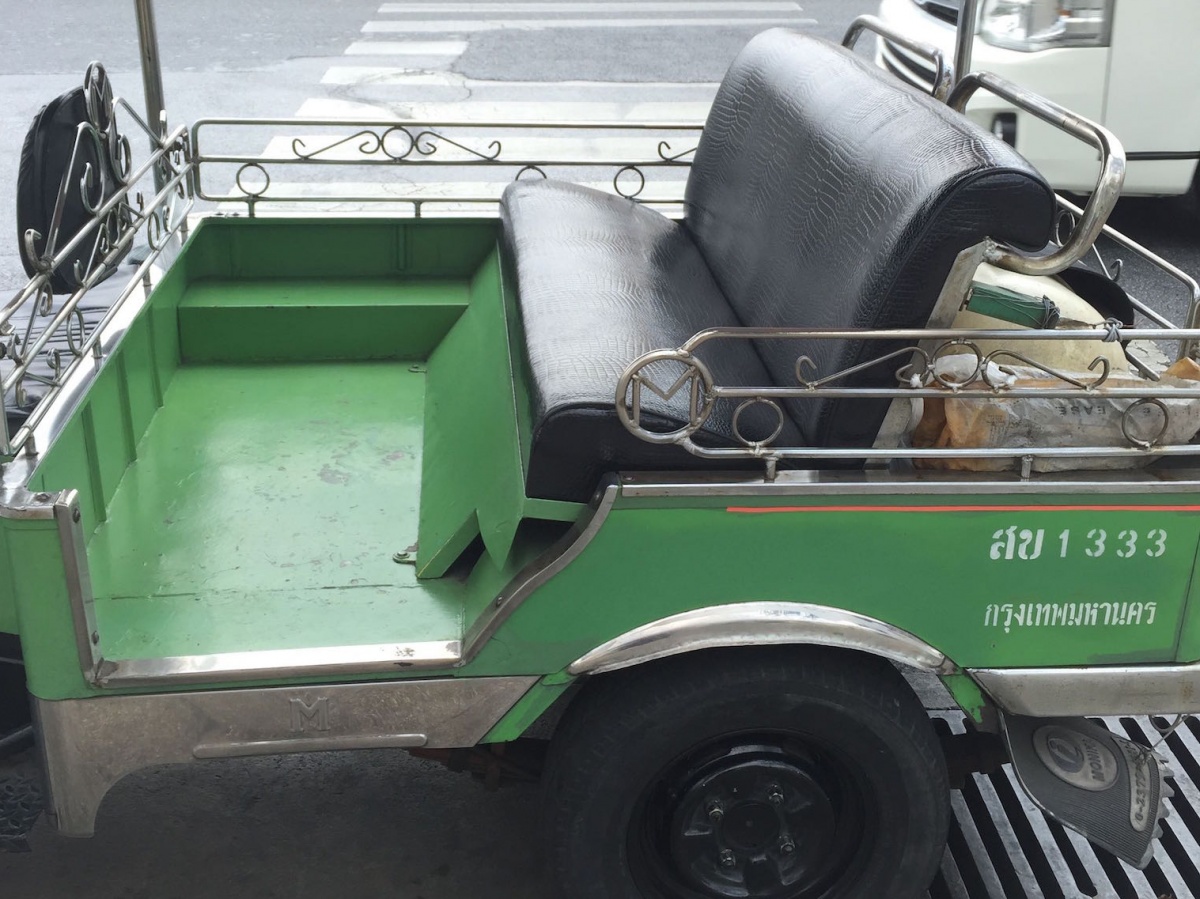 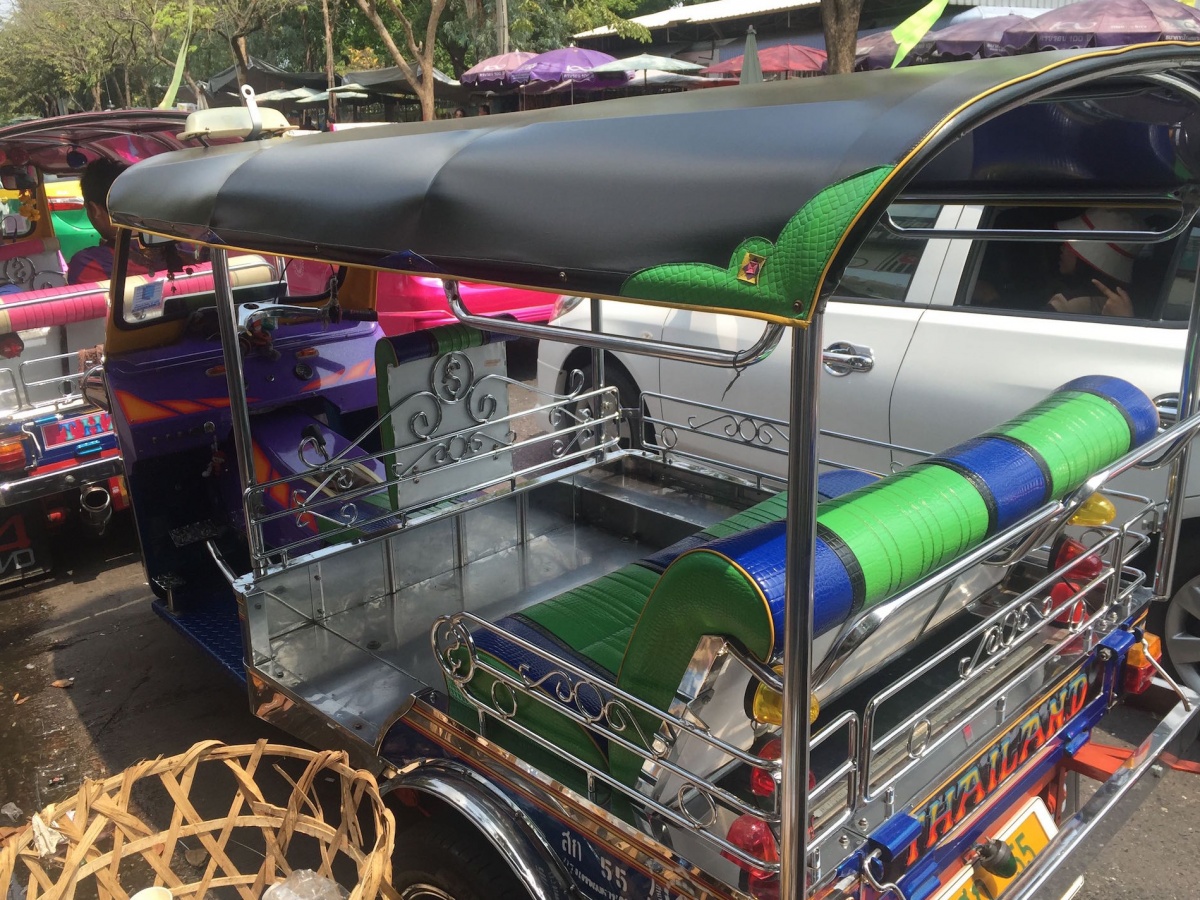 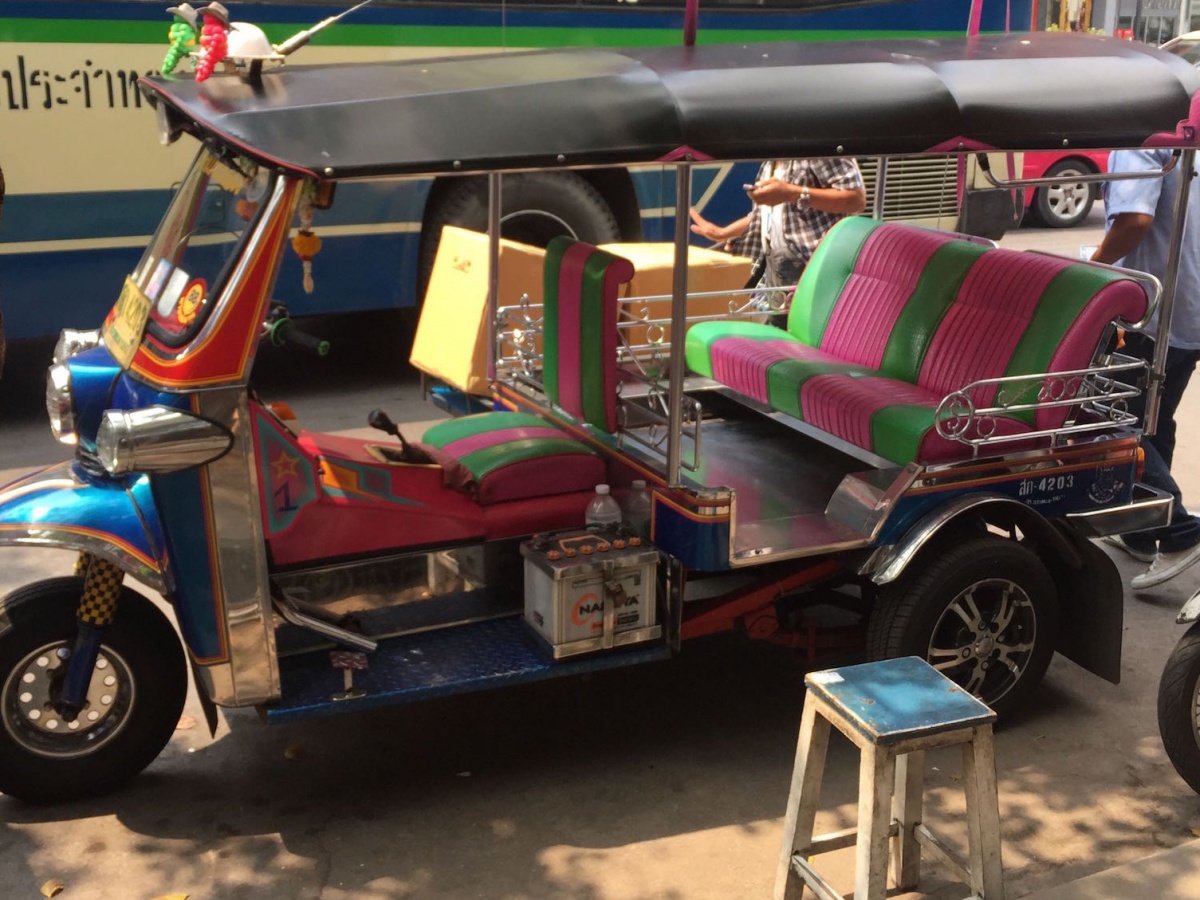 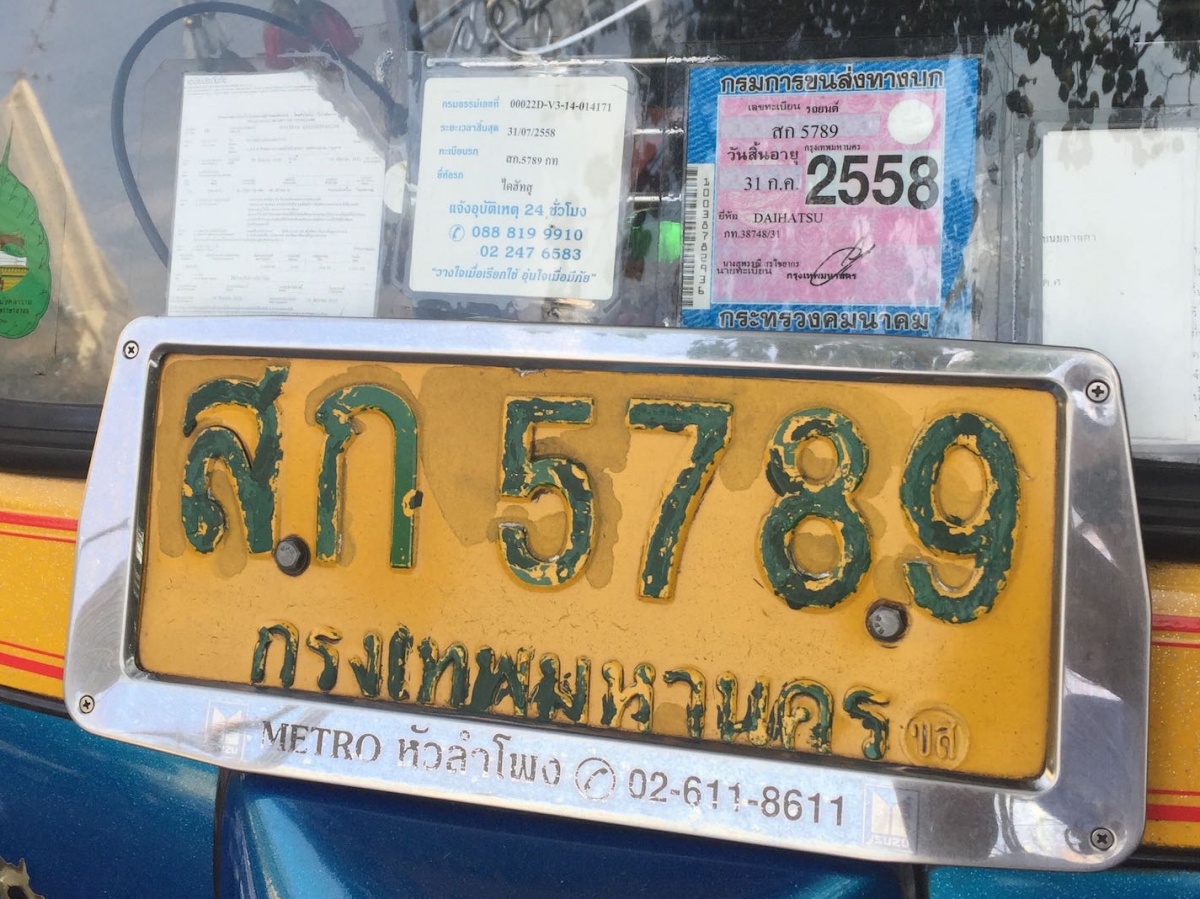 The price to ride in a Tuk-Tuk is usually more dependent on distance rather than number of passengers. Prices can ALWAYS be negotiated. Do not settle in a Tuk-Tuk until you can get the driver to confirm a price to your location. You never know what kind of day a driver is having, so asking "how much" is a good start. It is often more cost efficient to get in an air-conditioned taxi, but again, a Tuk-Tuk is for experience!

For a 5 minute ride, with minimal traffic, two passengers can often negotiate a price no more than 200 baht. 100 baht a person may seem excessive, but one voluntary Tuk-Tuk ride is usually worth it!

The internet displays many former Thailand tourists who claim a trip to the country is incomplete without a Tuk-Tuk ride!

Tuk Tuk's run on diesel like most other modes of transport throughout Thailand. They are usually two stroke engines, and commonly seen puffing black smoke, contributing to air pollution at large. Tuk Tuk's do not have side windows or doors, so passengers must be aware that they will be receiving some diesel fumed fresh air during their ride.

"Hollering" for a tuk tuk should always be done with caution, stay on the sidewalk, in a place where oncoming traffic can see you. Put your arm out and a tuk tuk or some other mode of transport will stop.

Because Tuk Tuk's do not have side windows or doors passengers must always hold onto belongings firmly. It is possible that motorbikes can zip by in traffic and snatch up whatever they can grab. BE CAREFUL. If you do not feel safe in a Tuk Tuk... get out!

How to Catch a Tuk Tuk

At the time of this writing tuk-tuks are generally unavailable in Bang Saen.

Elsewhere in Chonburi Province, they can be found in nearby municipalities of Muang Chonburi, Bang Phra, Sriracha, and Pattaya, among others. Tuk-tuks are generally used only for local transportation within a given town, and not for intermunicipal transportation.

To hail a tuk tuk is similar to hailing a taxi. Stand safely on a roadside and "wave and holler". Often tuk tuk drivers will honk, or yell if they see pedestrians walking in hopes they will hop in. Touristy areas have tuk-tuk stands like taxi stands.

You are guaranteed to find a tuk-tuk in most tourist areas such as the Grand Palace, Mahboonkrong Shopping Centre / Siam Square / Siam Paragon district, and Khao San road in Bangkok, as well as around Pattaya Walking Street. Tuk-tuks in Aythaya are quite distinctive, with enclosed front cabs and two rows of seats like a Song Taew. Prices in touristy areas are likely to be somewhat higher than in less popular destinations, where local Thais are their main clientele rather than tourists.