Bang Saen and Beyond - B1 and B2 Intercity Buses

A Blue B1 bus from Bangkok to Sriracha.

A sign for the Bangkok Eastern Bus Terminal, also referred to as the Ekamai bus terminal due to its proximity to the Ekamai BTS station.

The ticket counters at Eastern Bangkok Bus Terminal. At these counters tickets to the Chon Buri area are available.

The numbers on the back of the seats on a B1 Blue bus.

B1 Intercity buses are large air conditioned buses more suited to long distance travel. Western tourists will find them to similar to a Greyhound or Megabus. B1 intercity buses follow specific routes and schedules and can also accommodate more passengers than any other mode of transport. Usually B1 buses are used to travel journeys over half an hour. There are two kinds of B1 bus available Orange (comfort class 2) and Blue (comfort class 1). The blue buses are more spacious and expensive, but both varieties are air conditioned.

Seating on B1 buses is assigned and the number of your seat can be found on you ticket and on the backs of seats. Tickets need to be purchased ahead of time at the terminal the bus is going to leave from. Most of the signage in the bus terminals is in both English and Thai so it is easy to find the correct destination or ticket counter. Many of the employees also speak or can understand basic English. 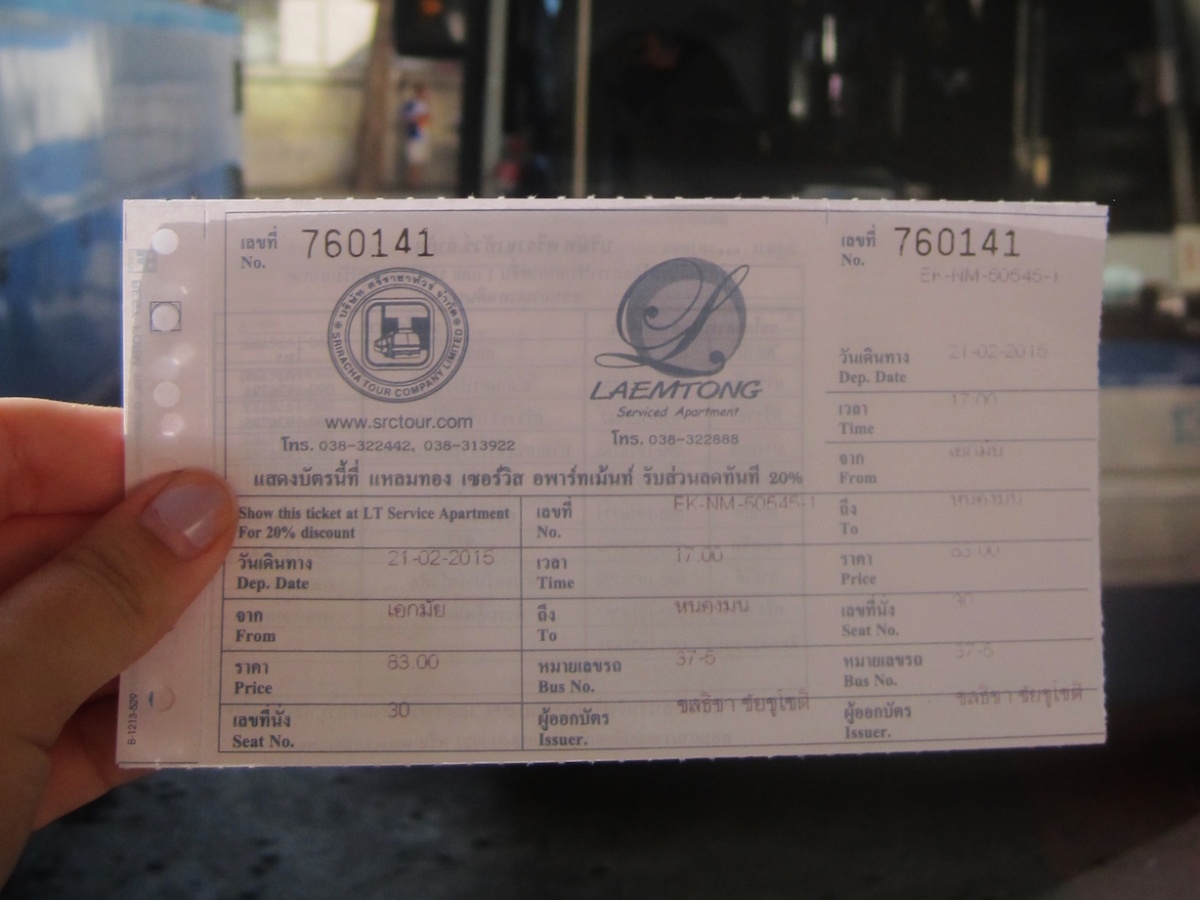 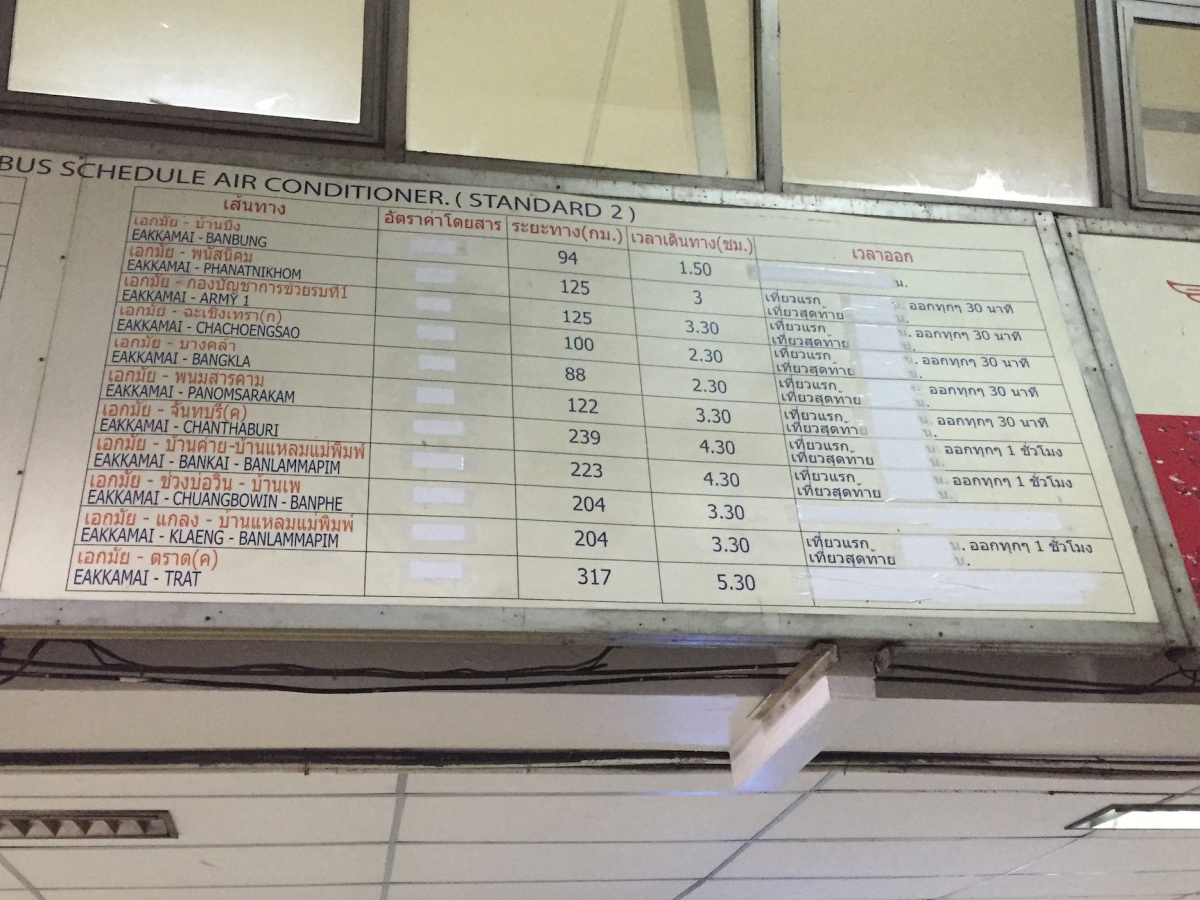 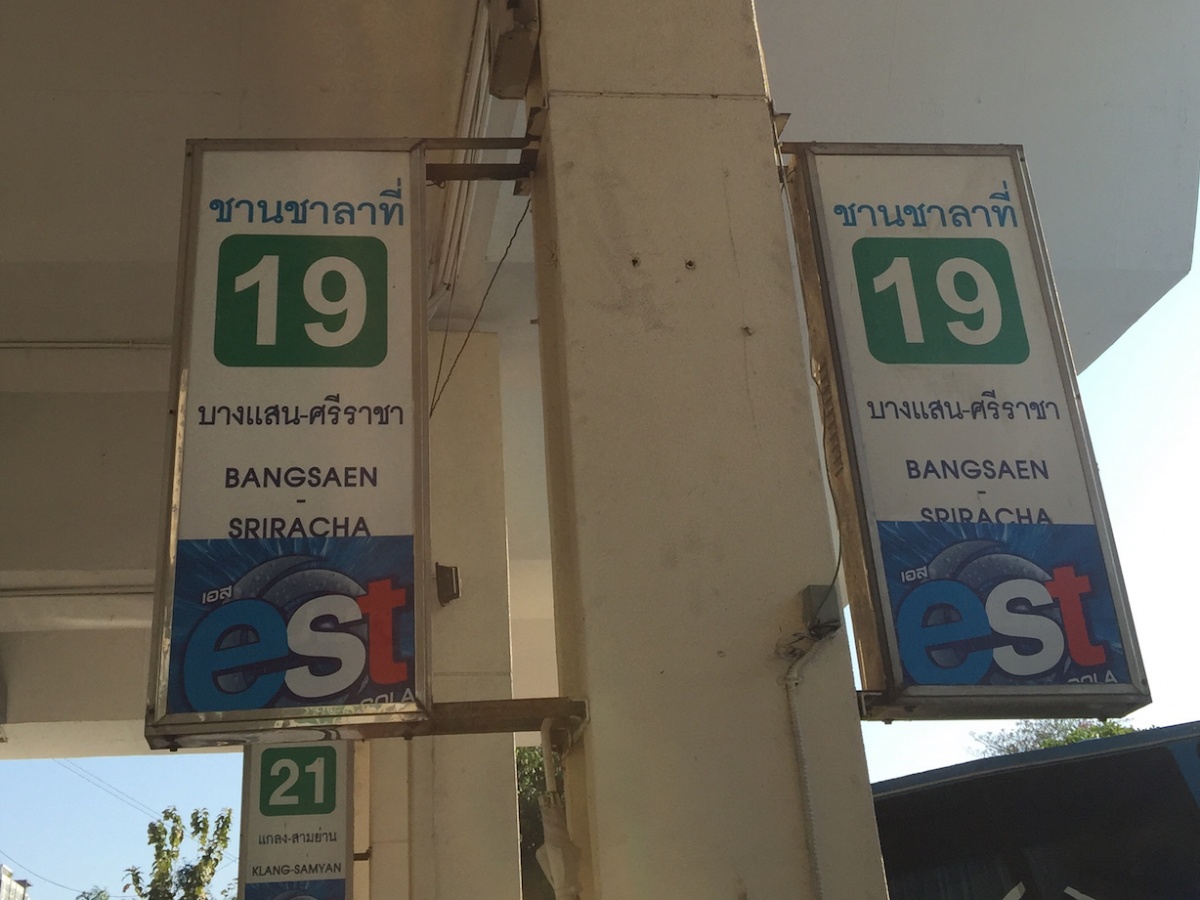 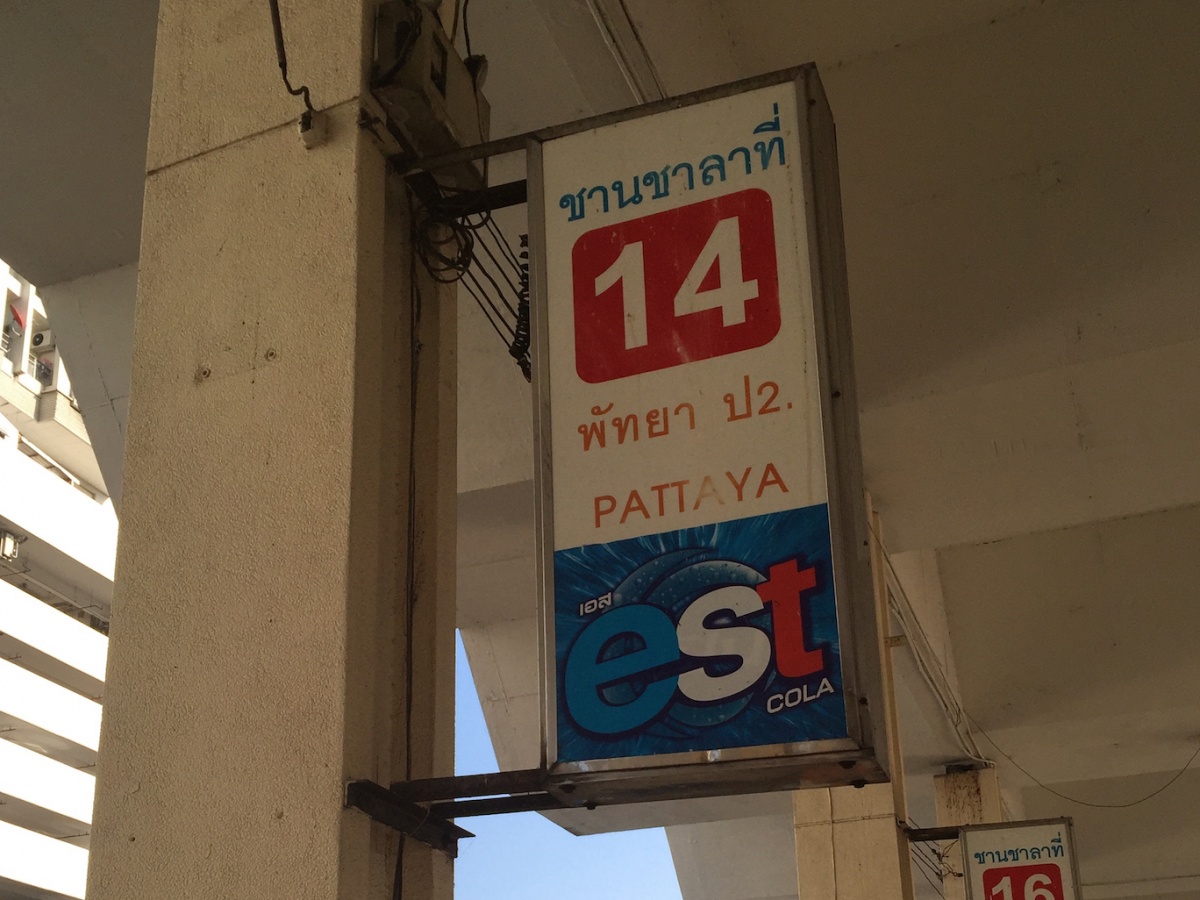 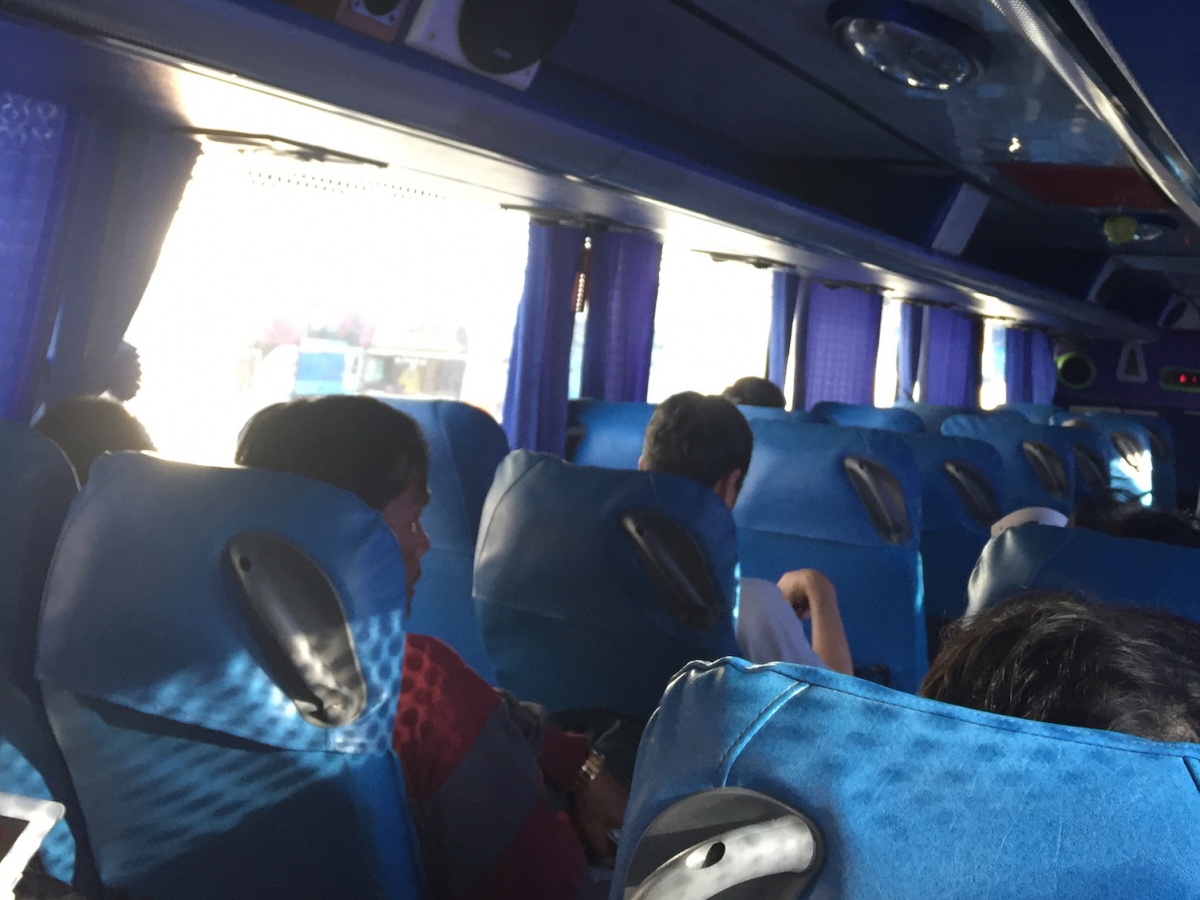 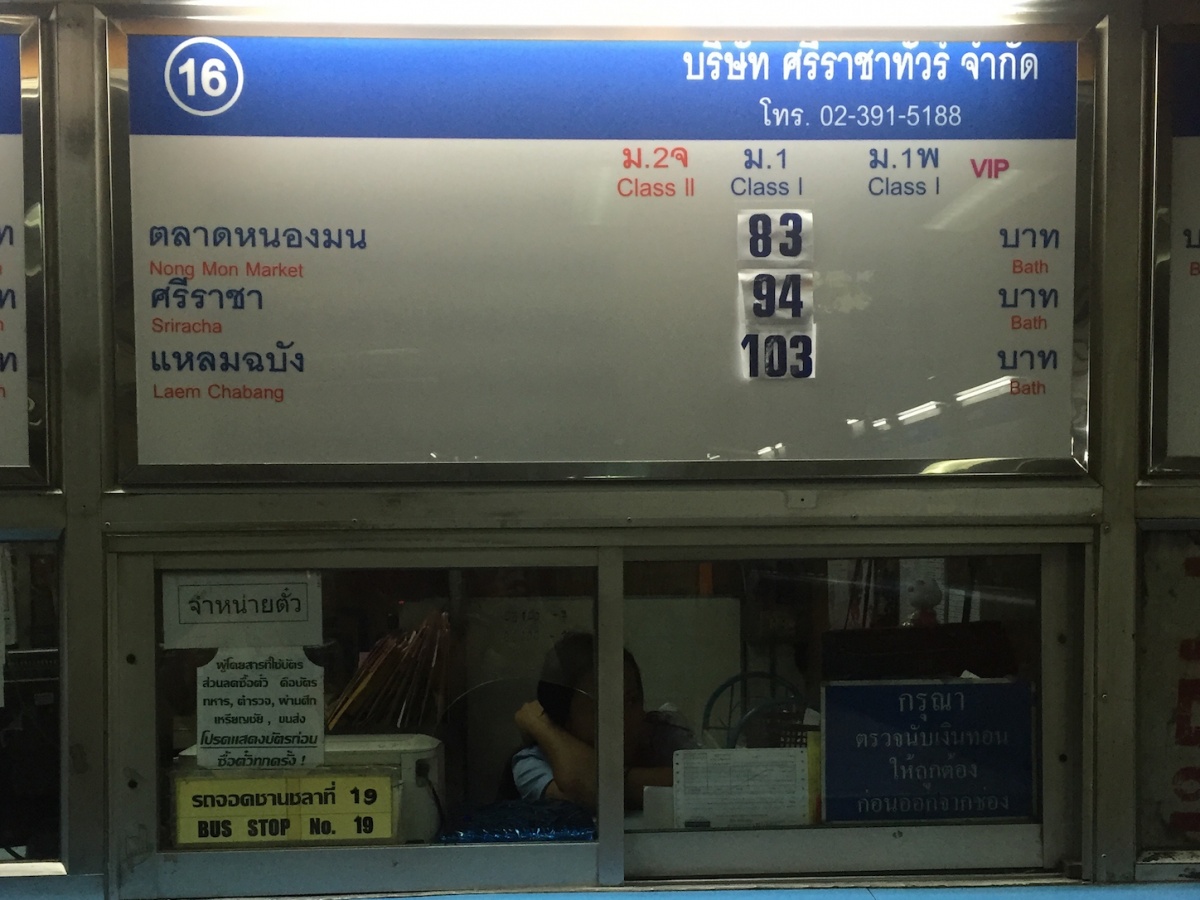 The fares for B1 buses are a set fee per person, calculated by distance travelled. All prices listed are for one way and trips can be reversed i.e.: Nong Mon to Ekkamai - 83 baht.

B1 buses are generally one of the most environmentally friendly ways to travel around Thailand because they can carry the most passengers. This lowers the carbon footprint per person.

Generally B1 buses can be considered a safe mode of transportation in Thailand. However travellers should be aware that their safety is in the hands of the driver and all other vehicles on the Thai highways and roads.

In Bangsaen B1 buses can be caught at the Nong Mon Market bus terminal. The bus station is quite nondescript and easy to miss, and has only Thai signage. The company that operates the station is called Sriracha Tour Nong Mon. Buses stop very briefly, so be sure to have your ticket in hand and be ready to board when it arrives.

In Bangkok there are three majorbus terminals.

In Pattaya buses can be caught at the Air Conditioned Bus Station.