The Moulin Rouge, formerly known as Bal de la Reine-Blanche, is marked by the red windmill on its roof.[1] The cabaret is located in the Paris district of Pigalle on Boulevard de Clichy in the 18th arrondissement.

The original Moulin Rouge opened on October 6, 1889 in the Jardin de Paris. Joseph Oller, creator, and Charles Zidler, manager, aimed to create a "mixed' atmosphere for the wealthy-upper class to enjoy.[2] The cabaret's strategic location brought all forms of lifestyles together, including, artists, the middleclass, foreigners, businessmen, upper class women, and the working class. As the home of the modern-day 'can-can' dance, Moulin Rouge was a successful French cabaret.[3]

After a February 1915 fire destroyed Moulin Rouge, the beloved entertainment building did not reopen until after World War I in 1921 under the management of Francis Salabert and Jacques-Charles, who was given the responsibility to restore the cabaret to its original glory. Moulin Rouge had no trouble reinventing itself thanks to stars such as Mistinguett, a French actress and singer, and Maurice Chevalier, a cabaret singer and entertainer. Over the years, Moulin Rouge underwent many entertainment changes, and eventually was known for its 'Night-Club' performances.

Moulin Rouge's toughest challenge came during the Nazi-occupation of Paris in the Second World War. The cabaret remained open, but was reduced to dancing and singing events. In the darkness of the occupation, Edith "Mome" Piaf, French singer and actress, was a beacon of hope for Parisians, and as such, her career soared during the war. Postwar Moulin Rouge did not reflect on business, it was not until 1951 the cabaret returned to former success.[4] Today, the Moulin Rouge is a famous tourist attraction that continues to offer musical dance numbers for visitors to see.

This destination is the final stop on the Nazi-Occupied Paris: Entertainment Tour

The infamous words, 'The show must go on', echoed throughout Moulin Rouge's walls as German soldiers marched into Paris. Controversy surrounded the cabaret's activities during the Nazi-occupation, as many associated with the Moulin Rouge were accused of collaboration. Maurice Chevalier, a French singer, faced absolute turmoil during the Second World War. His audience decline throughout the war years, however, he was always welcomed to perform in Nazi-occupied Paris, which supported the notion of collaboration. However, the evidence of his "collaboration" is difficult to prove, as German propaganda tarnished his reputation by publishing false information.[1] In end, Chevalier's name was cleared and he survived his death sentence. Similar accusations were thrown towards Edith Piaf, French singer and actress, whose career skyrocketed during the war. Her popularity was questioned, but no real evidence to support collusion with the Germans was found. Piaf, known as the 'Mother of the French Song' continued to perform at Moulin Rouge, where her famous songs, 'My legionnaire", "The hymn to love" and "The life in pink", were regularly heard.[2] The individuals who truly faced the consequences of interacting with the German soldiers were the cabaret women. Regardless of whether these women were forced or voluntarily held relations with Nazis, the association with the Germans resulted in absolute humiliation. After the Liberation of Paris, in an attempt to "cleanse" the women, they were shaved, defaced and paraded throughout streets of Paris.[3] In the end, any individual who was successful or seemed to have escaped the war with little to no trouble was accused and prosecuted for collaboration.

The surprising aspect of the cabarets was the German soldiers' participation in these places. In 1928, Joseph Goebbels, a Nazi Propaganda Leader, offered his grievances towards modernity, and the corruption and sins committed in West Berlin.[4] Goebbels describes Berlin West as "the heart turned to stone of this city… the eternal repetition of corruption and decay… humanity is in danger…".[5] This permissive and open atmosphere was the complete opposite of this so-called Nazi "Germanness". In fact, German cabarets resorted to hidden locations, as they became "the centres of leftist opposition to the rise of the German Nazi Party and often experienced Nazi retaliation for their criticism of the government".[6] Yet, once arriving in Paris, the Moulin Rouge was known for serving German soldiers and high command regularly.

The Moulin Rouge becoming a place of scrutiny was not entirely surprising. Being under Nazi-occupation was not an excuse, but it did cause great controversy, and that is almost unavoidable when it comes to war. 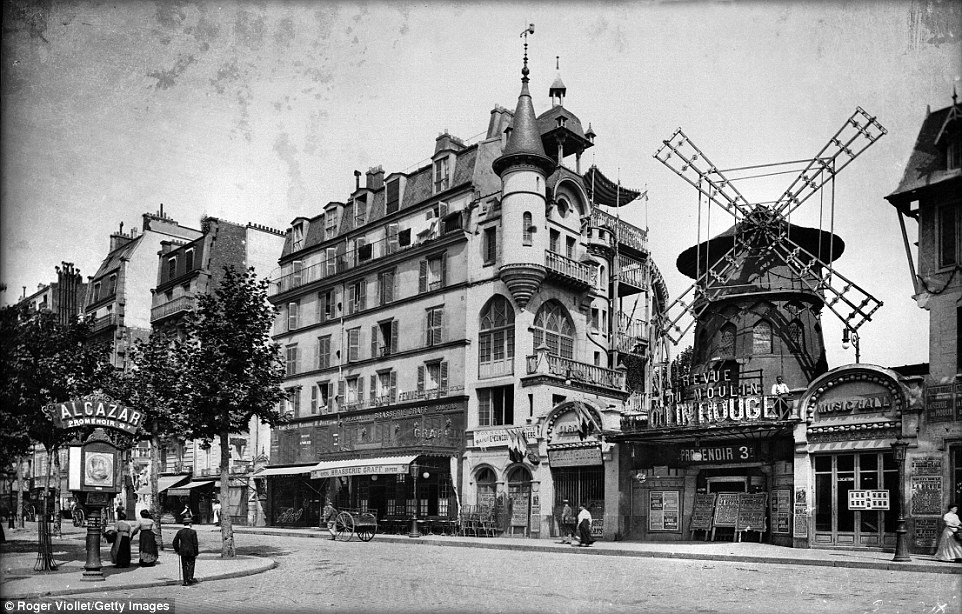 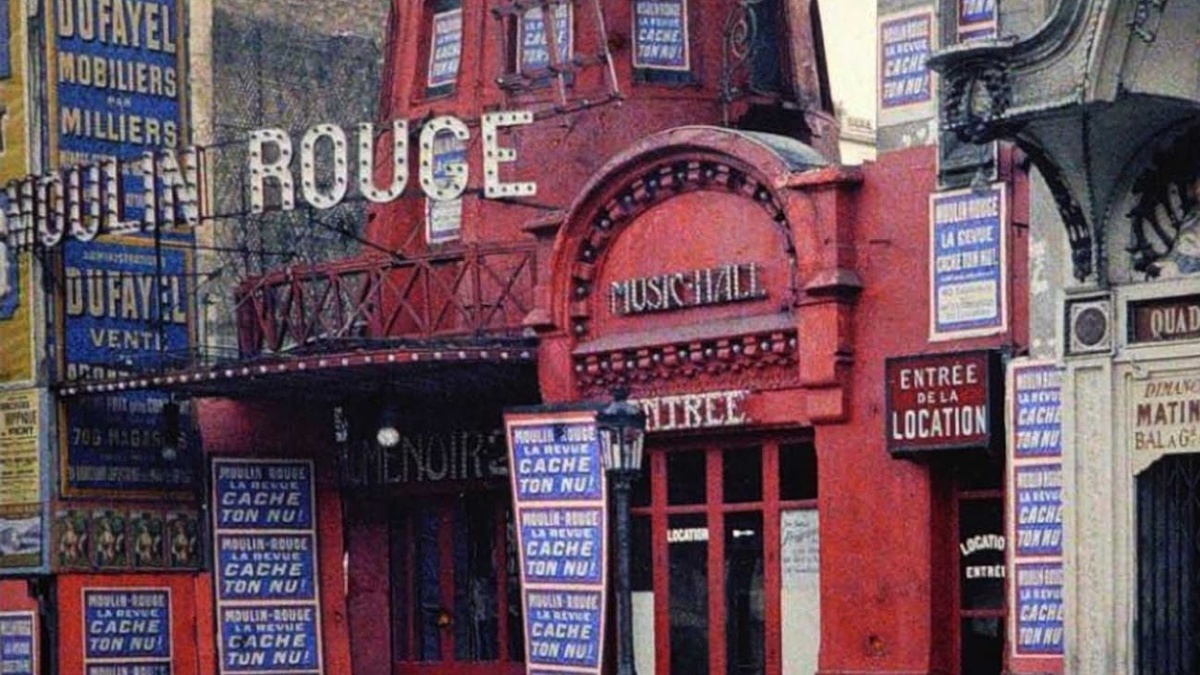 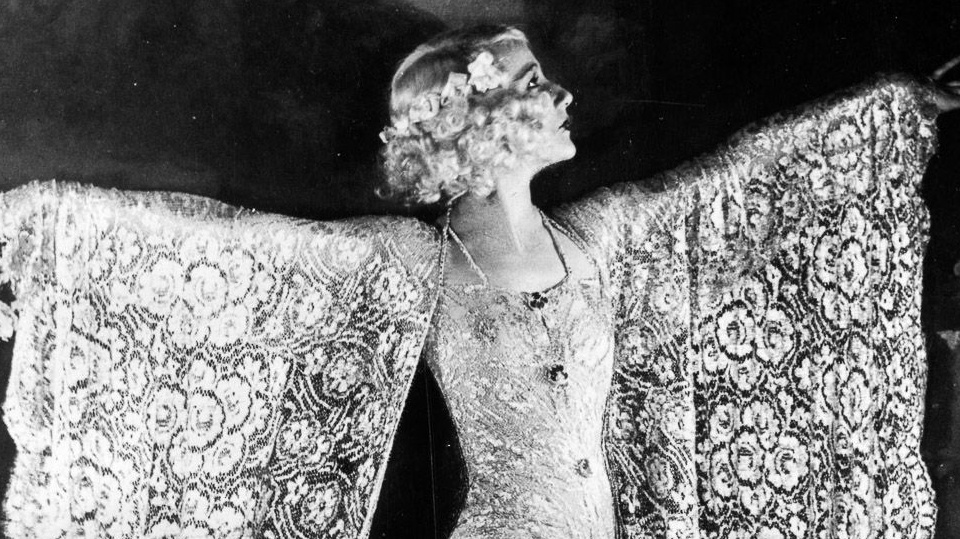 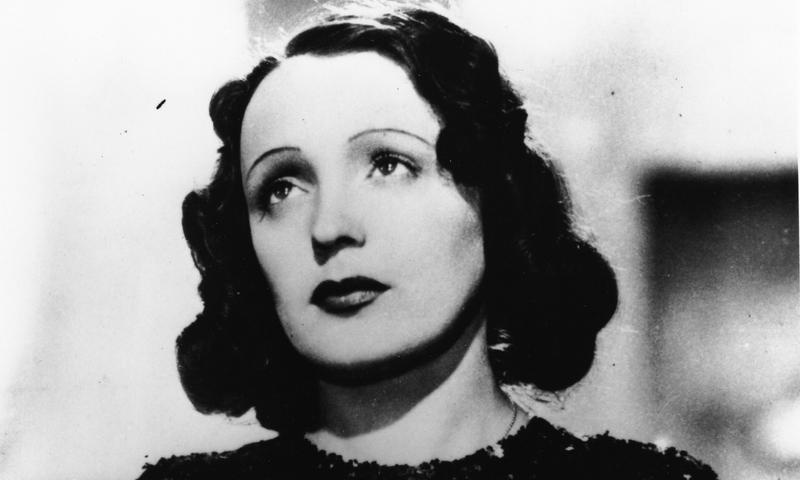 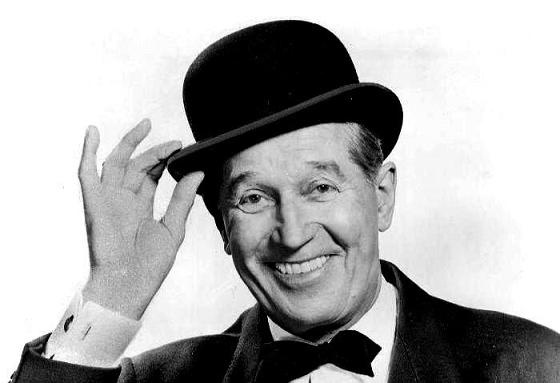 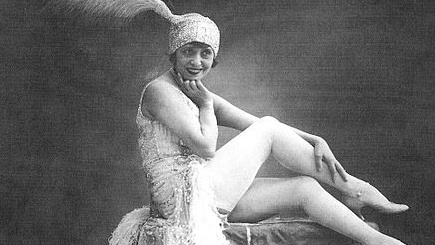 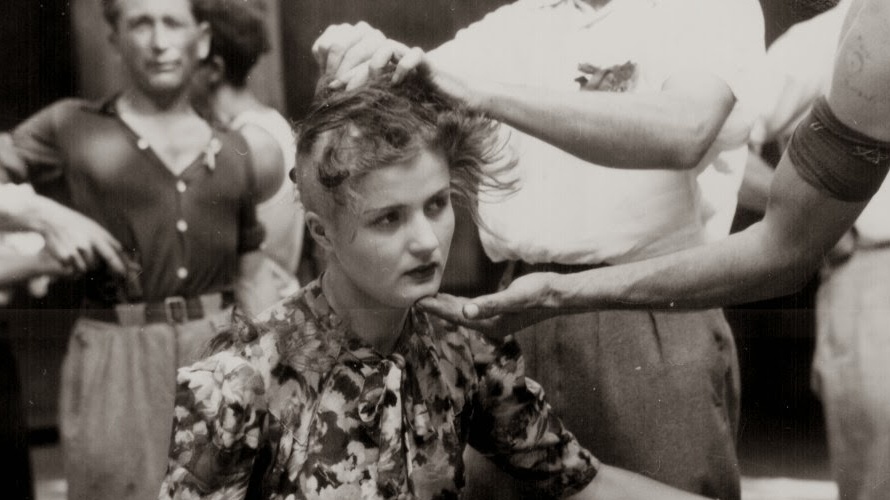 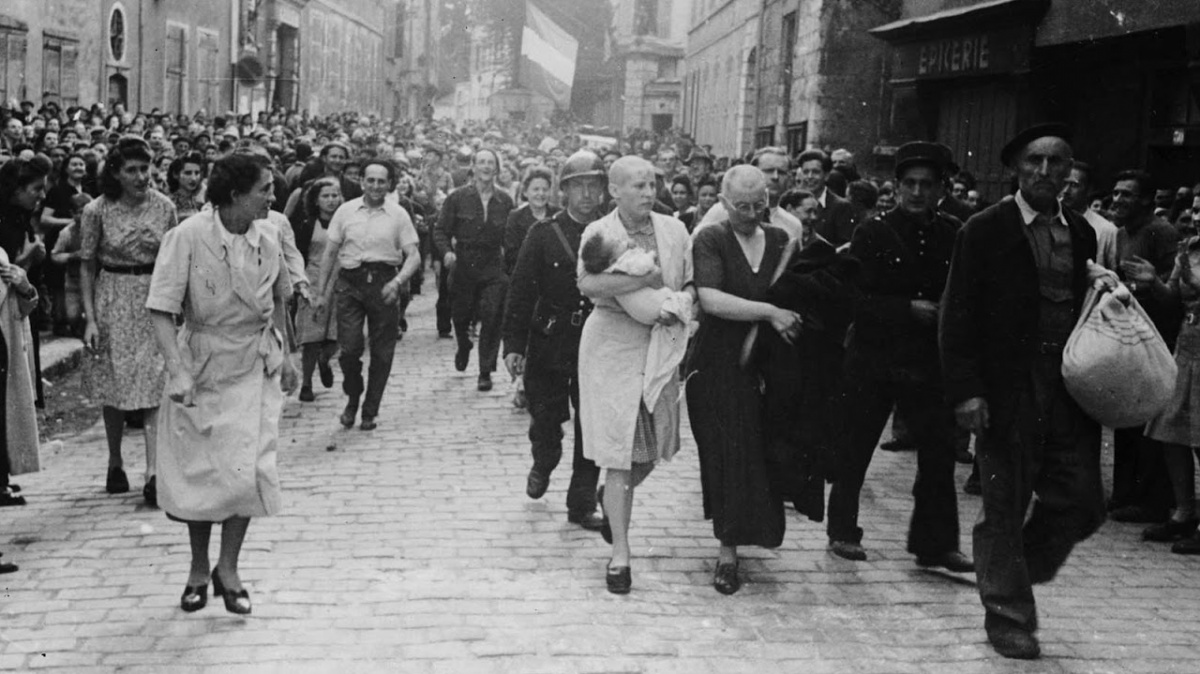 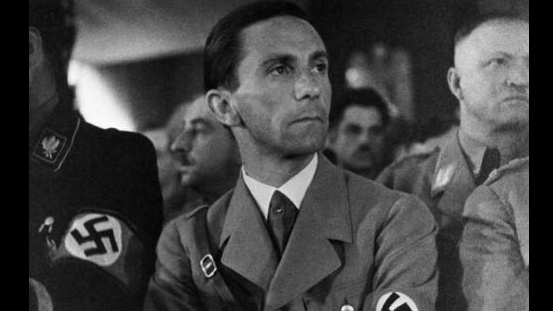 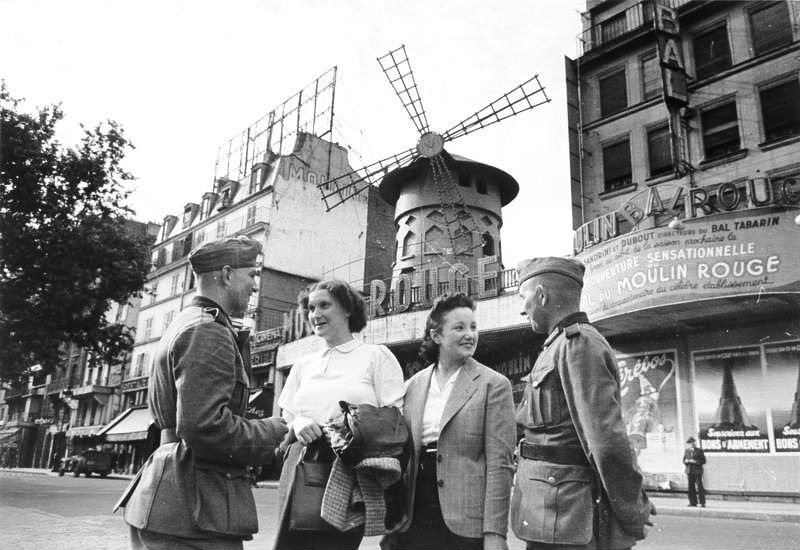 Significance of Site to Theme: Sources

The tour's focus on the entertainment aspect of Nazi-occupied Paris during World War Two, was to show visitors the contrasting differences between the lives of the Parisians and German soldiers. These theatres, art galleries, and other forms of entertainment consisted of themes of occupation, collaboration, propaganda and resistance. The points of interest cover several districts of Paris, starting at the Opera House, where Nazi-Regime flags were displayed, then tour moves to the Louvre, which was emptied prior to the June 22, 1940 armistice, and then shifts towards the Grand Palais, which displayed Nazi propaganda exhibitions, "European France" and "The New Life".[1] As the tour shifts to the 16th arrondissement, visitors encounter the Palais de Chaillot, the site where Hitler spoke to the French people, followed by the Salle Pleyel, and ended at the infamous cabaret, the Moulin Rouge. Each location circles the four themes previously discussed, but ultimately, the war, especially the Nazi-occupation of Paris, created a complicated situation for Parisians. These points of interest were no longer just leisure activities; there were political and social complications. The purpose of the tour was to explore how Paris' entertainment district became places of conflict and controversy, which ultimately altered Paris and its people.