Death, Disgrace and Disaster in Victorian London - The Hanging of Cornelius Burley

The sawn-open skull of Cornelius Burley

Cornelius Burley was the first…and the second man hanged at the London courthouse. The mysterious series of events leading up to and following his execution make his hanging one of the most unique in London's history. On August 19, 1830 over 3000 people gathered to witness his death. Unbelievably, the first time Burely fell through the scaffold, the rope around his neck snapped. He fell to the ground somewhat stunned but soon recovered and walked back up the stairs to where the Sheriff waited with new rope to receive his doom. After the second hanging, Burley's body was publicly dissected and the world renowned phrenologist Orson Squires Fowler took his skull on a tour across America and Europe. The skull was recovered in London in the sixties and was displayed in the Eldon House museum before finally being buried in 2001. There is one final twist to Burely's story. Scholars now believe that he was innocent and that he was sacrificing himself to save his cousin. For more information on Cornelius Burley's crime and a full copy of his confession read below. 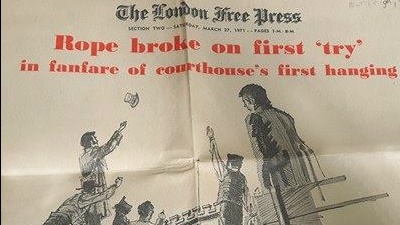 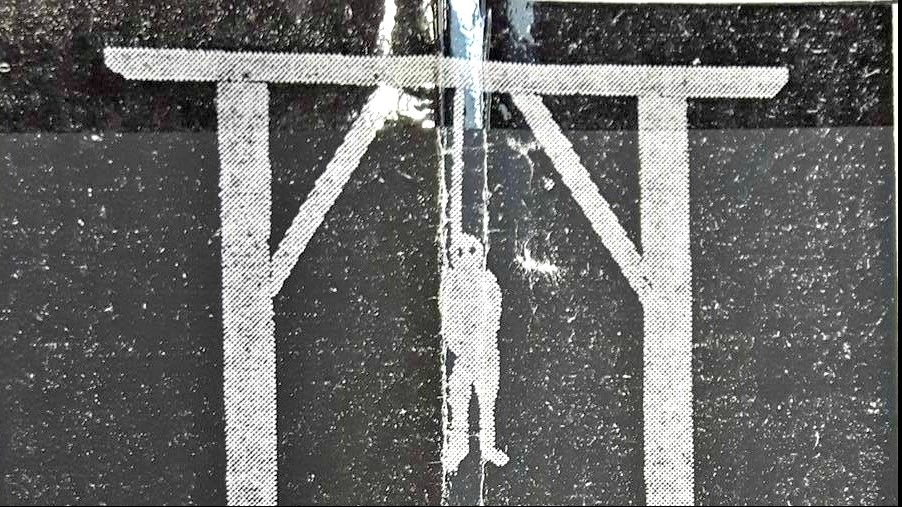 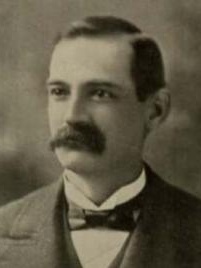 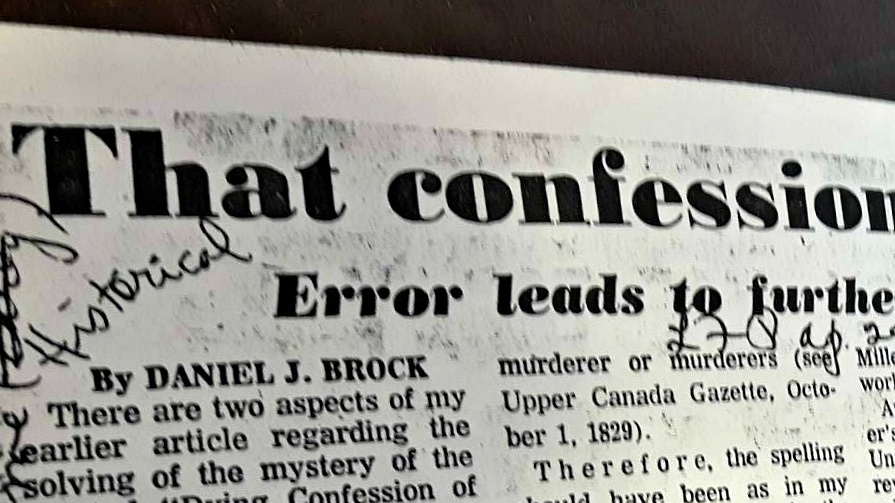 Burley's Crime and his Innocence

In 1829 a warrant was issued for his arrest, because in the midst of a heated argument he shot one of his neighbors cattle, and then fled to his Uncle Henry Ribble's farm in Bayham Township. When Constable Timothy Conklin Pomeroy arrived to bring him justice, the violence escalated and he was shot and killed. He was accused of shooting Pomeroy, along with his uncle, Henry Ribble, and his cousins Anthony and David Ribble. The Ribbles had a lawyer, were established farmers in the area, and were well educated, while Burely was from out of the county and was described as "poor, ignorant, weak-minded and almost an idiot". Nevertheless, the Ribbles and Burley were all put into the cells of the temporary wooden courthouse. Interestingly, during a jailbreak that winter Burely refused to leave his cell, perhaps believing he would be found innocent. All hope of this were dashed when Burely confessed to Reverend Jackson, who is said to have sat with him in his cell and "brainwashed" him for several hours. Burely's confession, and subsequent hanging acquitted his cousin Anthony Ribble, who would have stood trail after Burely.

Burely was not the type to commit a murder. He was also reportedly illiterate, which made the hand written and eloquent confession that Reverend Jackson read for him on the gallows all the more questionable. Jackson printed and published a copy in a pamphlet titled "The Dying Confession of Cornelius Burley" two weeks after the execution.

As I am on this day to be execute as the just reward of my crimes, and the only satisfaction which can be made to meet the penalty of the civil law which I have violated, I feel it to be my duty to all those who stand here as spectators of my disgrace, and also to God, who has been justly offended with me on account of my transgressions, to make the following humble confession before I die; an I sincerely pray that it may be acceptable in the sight of the Almighty God, and have a tendency to check the progress of evil, and prevent others from doing as I have done.

I have always been wicked and thoughtless from my youth, having been brought up under the tuition of my parents who were tender and kind in many respects, but never appreciated the benefits arising from education of religion therefore I never was instructed to read or write, nor did they ever attempt to impress my mind with religious sentiments; having no attachments to any system of religious instruction themselves, I was left to wander through the world under the influence of depravity, with out the advantages of education or religious instruction to counter-balance the influences of my natural propensities of evil of various kinds, particularly that of frequenting places of profane resort. I was often found in the merry dance, and lost no opportunity of inducing thoughtless and unguarded females to leaves the paths of innocence and virtue. I lived in constant neglect of the holy Sabbath, and considered it as a day of profane amusement and I entirely neglected the worship of God; and daring profaneness employed my tongue, which ought to have been employed n the service of God, and in imploring his pardoning mercy.

I was married at the age of 21 to a respectable young woman by the name of Sally King; but soon found pretext to forsake her, as jealousy arose in my mind. (Perhaps without any just causes) that she was guilty of the same crime that my propensities led to. Some time after this, perhaps in June 1829, I married a second, (the first being still alive) – her name was Margaret Beemer, of Waterloo.

The unfortunate circumstances which led to my untimely end were as follows: A misunderstanding took place between Mr. Lamb and myself, in which I considered that the said Mr. Lamb defrauded me; and I could get no legal redress for the fraud, and being influenced partly with a spirit of revenge and partly with a desire to get redress, I took the law into my own hands and shot a steer belonging to the said Mr. Lamb for which transgression a warrant was issued, and I was pursued and taken; but by a stratagem I escaped from the constable, and fled to the township of Bayham in London district, whither I was pursued by Mr. Pomeroy, the unfortunate victim of my rashness.

I made use of various means to escape from him and those who were aiding him in pursuit of me, until the dark nad unhappy night of the 15th September, 1829, when the heart appalling deed was committed, the thoughts of which produce the keenest remorse.

That evening I took the fatal instrument of death and after close examination that it was in order to do execution, I fled to avoid them, but in my flight I came near meeting them before I was aware of my danger; but as soon as I saw them I stepped behind a tree to avoid being seen by them, but Mr. Pomeroy at this moment altered his course and came toward the tree behind which I stood. I then supposed that he saw me, and was determined to take me; I then under the impression at the moment, concluded that my escape could not be effected without taking the life of Mr. Pomeroy; I accordingly presented my rifle, and ordered him to stand back, but gave him no time to escape till I fired on him, which shot was instrumental in bringing him to an untimely grave, and me to this disgraceful end. Yes! O yes! It was I who did this murderous deed; it was I alone who was guilty of this horrid and bloody crime, and none but I was guilty of shedding the blood of that trusty man, Mr. Pomeroy, who was faithfully performing his duty to his King and country.

As an act of justice due to Anthony Ribble, I am constrained to say that he had no hand in the crime whatever. Neither had any other person. It was altogether my own act for which I now feel to abhor myself and feel deeply humbled in the sight of God. O that I could recall that most shocking and dreadful deed! But as I cannot, I wish to warn all others nor to do as I have done. And I further say, that now considering myself as a dying man, I attach no blame to his Lordship the Chief Justice, nor his assistant on the Bench, the Sheriff, the Jurors, or Witnesses in my conviction and execution, as I believe they all acted from pure motives, and did their duty with punctuality in obedience to the laws of the country; and I only suffer the penalty that s justly due my crimes. I feel grateful for, and desire to acknowledge the favour of being visited by the ministers of the different denominations, whose instructions have been instrumental in leading me to my last refuge, which is Christ alone; and in my great extremity I have gained a confidence that through the merits of Christ alone I will be saved, although the chief of sinners.

I now big farewell to the world, and to all earthy things at the age of twenty six; and I sincerely hope that all you who behold my disgrace, will take a warning by my untimely end, and avoid the snares into which I have run. I freely forgive all that have injured me, and I sincerely ask forgiveness of all whom I have injured, but particularly God, whose righteous laws I have violated, but who has become the reconciled through Jesus Christ, and had given me as evidence of his love. O praise the Lord! I now leave this world with the fullest confidence that my sins are washed away in the Blood of the Lamb, and with sincere desire for the happiness of all I leave behind, I say again FAREWELL.

After he died on the gallows, his body was cut down and immediately set upon by medical doctors, who in those days would dissect corpses at the scene as a kind of second show for those attending the hangings. The famed phrenologist Orson Squire Fowler had interacted with Burely prior to his death and had become fascinated by the shape of his skull. Fowler had a theory that the shape of a skull could predict behaviour, and coveted Burely's as part of his research. During this macabre second show Fowler sawed the domed top of the skull, inserted a lighted candle in the spinal hole at the base, and used it to illustrate his theory that the location of thin and thick sections of the wall of the skull indicated certain characteristics. He became a multi-millionaire by touring and lecturing all over the world with Burelys skull, demonstrating his theories. It eventually ended up back in London when Fowler gifted it to the Harris family. Reportedly, he did not even remember Burley's name when questioned about the skulls origin. Burley's final remains were kept at Eldon House until 2001, when he was finally laid to rest.

Burley's tragic story shows the flaws of the justice system in Victorian London. Bias coloured the eyes of the courts, and it is now evident that an innocent man was hanged. Stories like this show that London in the Victorian era was not immune to deadly errors.