This building famously housed the hat shop of Edmond Beltz, London's best-known nineteenth century hat maker. Hats, for both women and men, were an important part of nineteenth-century attire and often marked one's wealth and status. London in the late 1870s was becoming a wealthier and more civilized city, and important artists such as William Lee Judson and Paul Peel, both of whom later achieved international fame, called it home. The American poet Walt Whitman also visited the city in 1877, when he met the remarkable physician Dr. Richard Maurice Bucke, who is credited with reforming the London Insane Asylum. London also boasted a small but active musical community, centred largely on the churches, Huron College and the two Hellmuth colleges. It was also in the mid-1870s that the London Street Railway Company began the operation of a three horse- drawn tram, the city's general hospital was opened, the influential Women's Christian Association and the London Collegiate Institute were founded and Blackfriars Bridge was erected. In March 1878, by an act of parliament, "the Western University of London, Ontario" was launched with the aid of Isaac Hellmuth.

As a result of this prosperous period, the London merchants grew rich and built grandiose mansions to assert their new wealth and status. In 1876, Beltz built one of the most impressive mansions in London, specifically on the northwest corner of Queen's Avenue and Picton Street, in what is now known as the Woodfield Heritage Conservation District. In the nineteenth and early twentieth centuries, Woodfield was one of the city's wealthiest residential areas. The Woodfield neighbourhood encompassed many of the former homes of downtown merchants, industrial capitalists and wholesalers. The most magnificent houses stretched on both sides down Queen's Avenue and Dufferin Street. Many remained in place until the Second World War, after which massive demolishing took place. Many other magnificent buildings were later built in the North of the city on streets that echo their English namesakes, such as Grosvenor, Cheapside and Regent. In 1897 Harry Furniss, the Punch cartoonist and illustrator of novels by Charles Dickens, William Makepeace Thackeray and Lewis Carroll, visited the city. He was greatly amused to see the duplicated street names and Canada's London became known to London, England through a satirical cartoon. 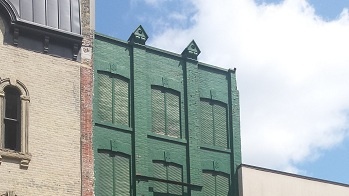