Cathedral of St. Catherine of Alexandria

The plaque blessed and dedicated on Sept.19, 1982 to commemorate the history of the Cathedral Photo: Marita Ragheb.

A close up of the steeple, green with age.

Limestone Walls, and an oxidized steeple make the Cathedral of St. Catherine stand out.

In 1997, the Diocese of St. Catharines numbered around 150,000 Catholics, with about 50 parish and mission churches and served by some 100 priests. There are twenty religious communities of fathers, brothers, and sisters who run a wide variety of educational, social, medical and charitable institutions within the Diocese.

The Catholic community contributes to all walks of life in the Niagara Peninsula. In addition to their spiritual role, the clergy have taken a strong hand over the years in building up institutional life of the area with the help of the communities. Members of the church have served as explorers, traders, soldiers, farmers, canal builders, railroad workers and factory labourers over the years. 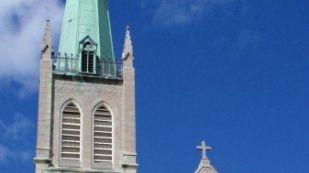 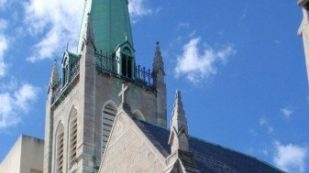 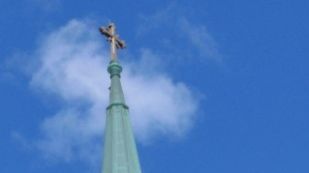 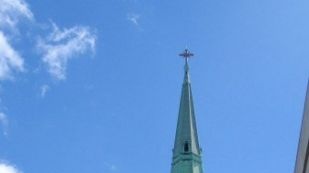 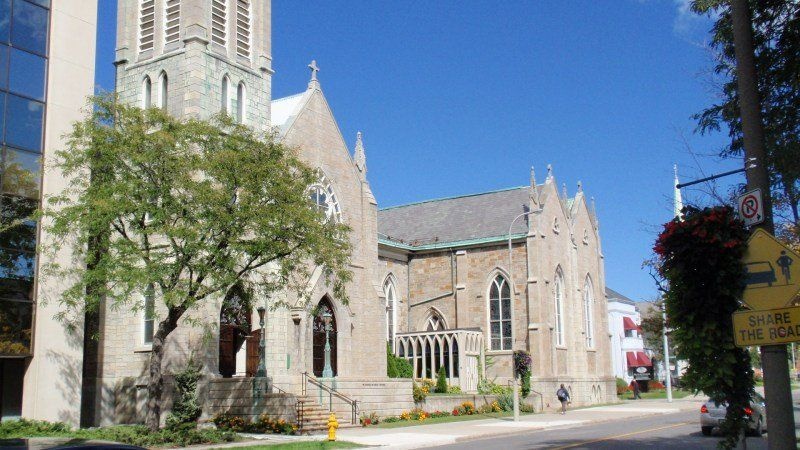 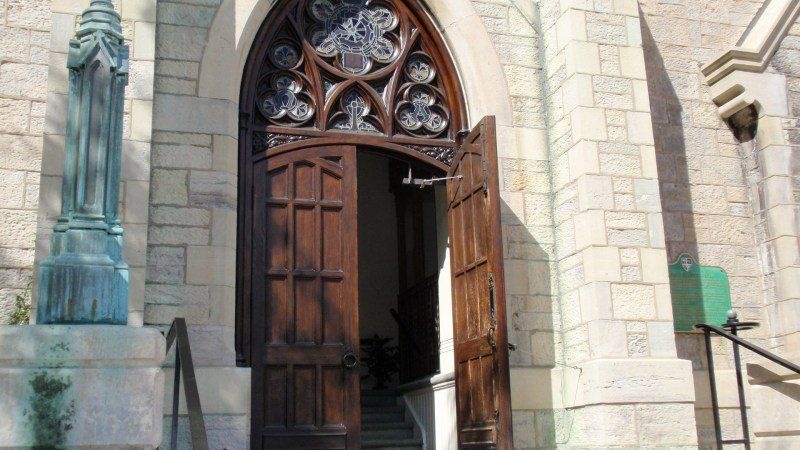 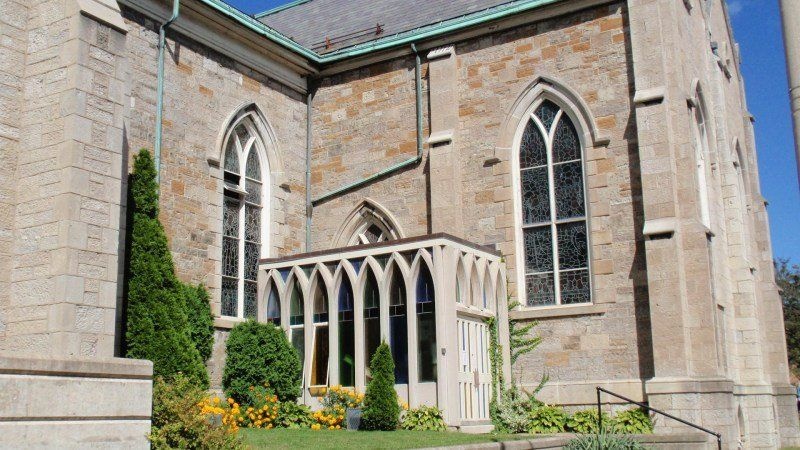 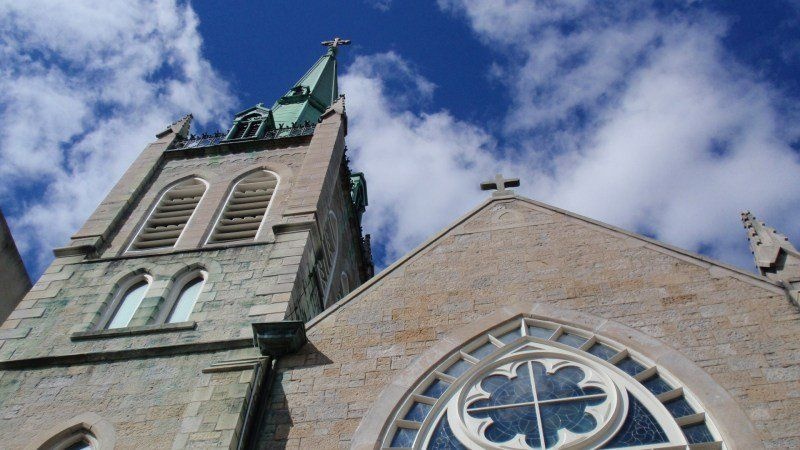 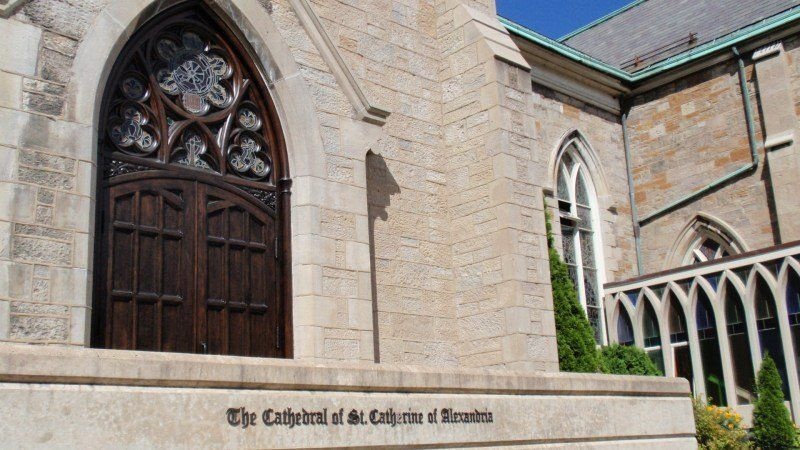 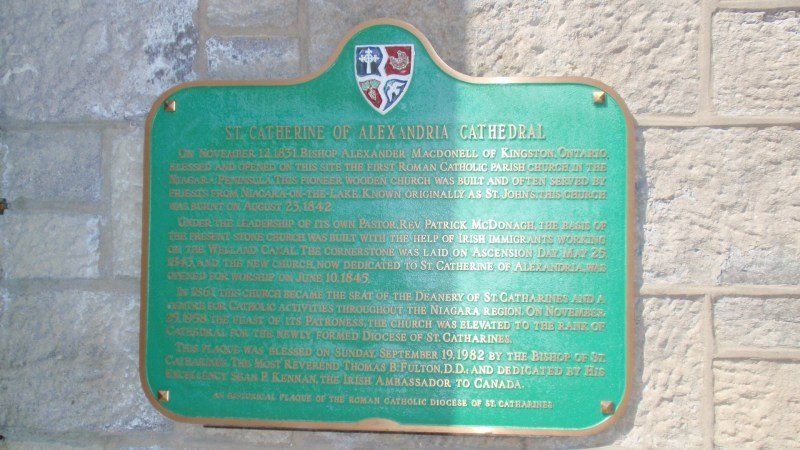 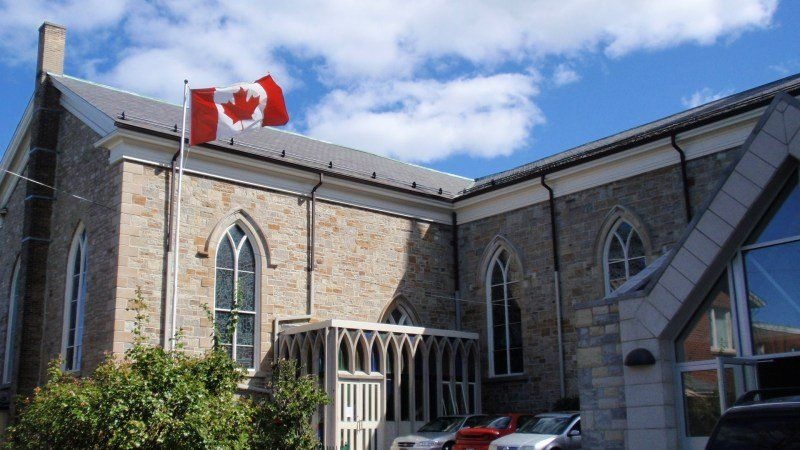 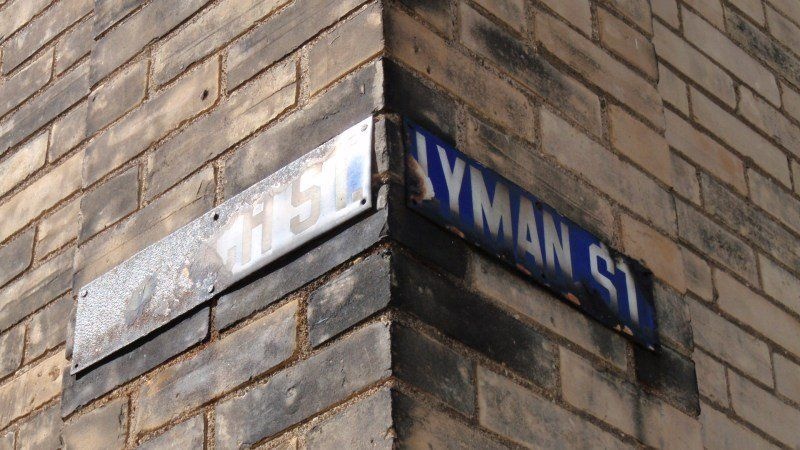 From the QEW, take the ON-406 S toward Thorold/Welland/Port Colborne. After 6.1 km, take the Regional Road 91 W exit toward Westchester Avenue. Merge onto Westchester Ave. Continue straight on Ontario St., after 400m, turn Right onto Church St.

Another 500m, and the church will be visible on the Left side, however take the next Left onto Lyman St for parking and office entrance on the Left.

From the QEW, Take the exit toward Regional Road 48/Niagara Street/Regional Road 77/Welland Avenue, Merge onto Dieppe Rd. After 450m, turn Right on to Welland Ave, and continue for 1.5km. Turn Left on to Geneva St, take the second Right on to Church St. And then the third Right onto Lyman St. Destination will be on the Left.

The first Catholic church at St. Catharines was built to meet the spiritual needs of the Irish labourers who built the first Welland Canal which was opened in 1829. It was a wood structure on the same site as the present cathedral.

On November 12, 1831 Bishop Alexander Macdonell of Kingston blessed and opened this church which was the first Roman Catholic Parish church to be built in the Niagara Peninsula. This first Catholic Church was burned down by an arsonist on August 23,1842. Fortunately the second Welland Canal was being built between 1842-45 and thus there were once again many Irish labourers in the area. There was quite a lot of sickness in the work camps and Dr. Constantine Lee, then Pastor at St. Catharines, contracted one of the diseases while ministering to the workers and died in the winter of 1842-43.

Often there were delays in construction of the canal, so the Irish workers used their free time to build a new parish church. Father McDonagh laid the cornerstone on May 25, 1843. The Irish Canal workers continued to build the church for the next two years - for which there is a commemorative stone in Latin, dated 1844, by the entrance to the church. Father McDonagh opened the new church, which was dedicated to St. Catherine of Alexandria on June 10, 1845. During the latter part of the nineteenth century many additions were made to the church to give it the structure it has now.

Over the years, the interior has been updated to give the church the appearance that it has today, including a million dollars of work updating the foundation, bell tower, and organ. In 1945, a celebration was held honouring the one hundredth anniversary of the church, and on November 25, 1958 it became the Cathedral Church of the newly formed Diocese of St. Catharines.

The first crest was designed when the new Diocese of St. Catharines was established in 1958. This crest consisted of the Bishop's mitre and the broken Catherine Wheel superimposed upon the Welland Canal. This was replaced by a second crest in 1983, which hoped to incorporate still more of the theological, historical and geographical features of the Diocese.

The crest is divided into left and right halves from top to bottom by the Welland Canal - portrayed in the crest by six links going from right to left, back and forth three times. The crest is divided into a top and bottom half by two wavy lines, representing the two major rivers in the St. Catharines Diocese - the Grand River to the left and the Welland river to the right. The blue background represents the sky and the rest and peace that only Heaven can give. It symbolizes the desire of the Diocese for peace with its neighbours in the United States of America, as well as within the local Niagara Peninsula community, an area of Canada which has had more than its share of battles over the centuries.

The Story of St. Catherine of Alexandria

Although the exact reasons why the City of St. Catharines was originally called by this name remain in doubt, those of the diocese have a strong devotion for their patron saint.

A citizen of Alexandria, Egypt, St. Catherine died around 310 AD, during one of the persecutions of Christians that were so common in the Roman Empire. She refused to renounce her Christian faith and through her dedication converted many to Christianity. Catherine was tortured on a spiked wheel which broke miraculously when she was placed upon it, which is why there is the broken Catherine Wheel in church symbolism.

Eventually she was beheaded and her body is reputedly buried in a monastery on Mount Sinai. St. Catherine was one of the voices that spoke to St. Joan of Arc, and St. Catherine has always been a particularly popular saint among the people of France. She is the patroness of maidens, philosophers and preachers, and of the Cathedral and Diocese of St. Catharines.